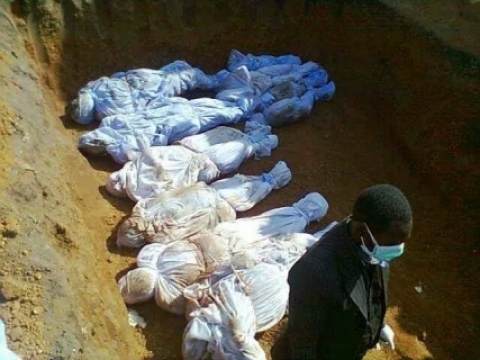 More communities were attacked yesterday in communities in Sanga Local Government Area of Kaduna State, killing over 40 despite the presence of soldiers and policemen in the area, the National President of Ninzom Progressive Youths (NPY), Mr Bezard Wuyah, tells SundayTrust.

The attack on the Ninzom villages between Thursday, Friday and the early hours of Saturday brought the total number of people killed to 200 by suspected Fulani Herdsmen according to survivors accounts.
The Chairman, Sanga LGA, Mr. Emmanuel Adamu, confirmed the fresh attacks adding that many people were killed but could not reveal the number. 110 killed had earlier been buried in a mass grave.

“Up to today both SEMA and NEMA have not come here and the people are suffering. But the problem is that they are careful about their movement because of the news of several attacks still ongoing without help,” Adamu said.

Some 110 bodies were given mass burial last Thursday after other families took away the corpses of their loves ones for burial.
It was gathered that as a result of the attacks, over 50,000 people have been displaced but are now living in camps located in Gwantu Police Stations, Primary and Secondary Schools and neighbouring communities in Nasarawa state without food.

“Right now, we have been touring some of the villages affected. Last night (Friday) Ambie, a village of about 5,000 people was sacked. We lost 30 people, and I am told that there are more corpses in the bushes. In Paa, a village close to Gwantu, the town was attacked from 10am this morning (Saturday) till this afternoon. Ten people were killed.

The town is also burnt down. The entire villages are now empty. I am now in Gwantu with Kaduna State Commissioner of Water Resources, Mr. Audu Dogo. He can testify to what I am saying,” Mr. Wuyah said.

Kaduna State Police Command Spokesman Aminu Lawan told journalists that there were no such incidences.
“Everything is calm and normal. We are not aware of any further killings. Normalcy is returning to the place”, Lawan said.