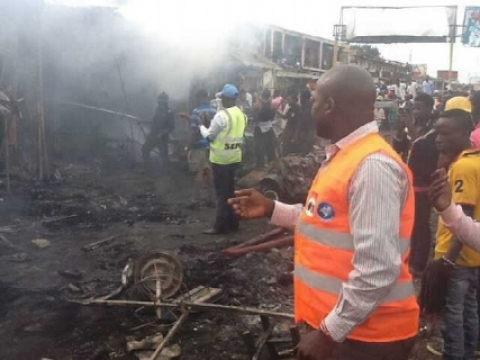 Minister of Information, Labaran Maku at the Federal Executive Council Wednesday lambasted the  Governors of the 19 northern states, saying that the insurgency in the zone has continued to fester because “they are not doing enough to win the war against terror”..

A transcript of the what Nigeria’s Information minister said.

“It is not the weaknesses of the armed forces, it is the same way the Americans are getting frustrated in Afghanistan. If the terrorist they were to stand against the Nigerian armed forces, they will not last 30 minutes and will be completely destroyed”

“Every Governor of the 19 northern states must reorganize its people to monitor people at the grass root or local level. Until we have every state government determined to organize its people in terms of information gathering, we may not be able to defeat terror” he warned.”

“We have not seen this preparation going on, if we did this, Chibok would not have occurred. If we are organizing our people, I believe we would have defeated terror by now. You need the cooperation of every little unit to expose these people who are terrorizing the people”

“The entire north must prepare its traditional rulers, each village heads, each religious leaders and the people to create the necessary synergy and mobilize the people against Boko Haram”

“We need to speak with one voice against terrorism. But the right political mobilization must be put in place and I think that this is what the media should support”

“When people tell you that because we have send troops we can win the war, it is not true. It is a war between a few ideologically programmed individuals. You need the right networking. We do not have to wait a long time if we do what we are supposed to do and without this cooperation, these people may continue to waste more blood”

“If we destroy our armed forces, we do not have alternatives. These are the people being killed daily and they are doing a lot for this country. These are people whose children are being turned into orphans. This is a gorilla warfare and we believe that Nigerians can help to win it if we prepare ourself and organized our self to defeat terrorism by mobilizing our people to give information about the terrorists”.

“The objective of terror group is to divide the opinion of Nigerians, put fears into the people and get them disunited and we need to understand that politic aside, we must unit to fight this terror.”

“It is the Nigerian efforts that can bring this terror to an end. We need every religious leader to be able to speak to their people”.