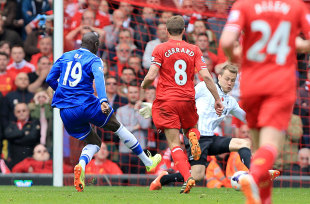 Chelsea remained in the hunt for a Premier League and Champions League double after a 2-0 win away at leaders Liverpool on Sunday.

Victory saw Jose Mourinho’s men close to within two points of top spot in the Premier League with two games to play.

However, third-placed Manchester City will be just three points off the summit, with a game in hand on both Liverpool and Chelsea, if they win away to Crystal Palace later on Sunday.

Senegal striker Demba Ba put Chelsea ahead in first-half stoppage-time when a slip by Liverpool captain Steven Gerrard allowed him to charge through and beat Reds goalkeeper Simon Mignolet in a one-on-one.

Chelsea put the result beyond doubt in added-on time at the end of the match when, with the hosts pressing for an equaliser, former Liverpool striker Fernando Torres led a counter-attack before squaring the ball to substitute Willian for a simple finish.

Chelsea face Atletico Madrid in the second leg of a Champions League semi-final at Stamford Bridge on Wednesday after a goalless initial encounter in Spain.

– Sunderland off the bottom –

Earlier on Sunday, Sunderland climbed out of the Premier League relegation zone with a 4-0 win at home to 10-man fellow strugglers Cardiff.

Connor Wickham headed Sunderland, who kicked off bottom of the table, into a 26th-minute lead at the Stadium of Light but the match turned decisively in favour of the home side on the stroke of half-time.

Wickham burst clear and was bearing down on goal when his shirt was tugged by Cardiff centre-back Juan Cala, whose poor back-pass had let him in.

Phil Dowd played an advantage after Wickham stayed on his feet but, when that didn’t lead to a goal, the referee blew for a penalty and sent off Cala.

Fabio Borini, as he’d done in Sunderland’s shock win over Chelsea, scored from the spot.

Emanuele Giaccherini put the result beyond doubt by making it 3-0 in the 76th minute before Wickham headed in his second goal four minutes from time.

Sunderland’s victory saw Gus Poyet’s side move above Norwich, who dropped into the relegation zone on goal difference, with a game in hand on the teams around them at the foot of the table.

Defeat plunged Cardiff to the bottom, two points shy of safety with two games to play.

An elated Wickham told the BBC: “I’m over the moon. I can’t ask for much more.

“We’re out of the relegation zone and we’ll keep fighting to stay there.”

Everton missed the chance to go above Arsenal in the race for fourth position, and a place in next season’s Champions League, after two own-goals condemned them to a 2-0 loss at Southampton.

Arsenal will move four points in front of Everton with two games to play if they beat Newcastle at the Emirates Stadium on Monday.