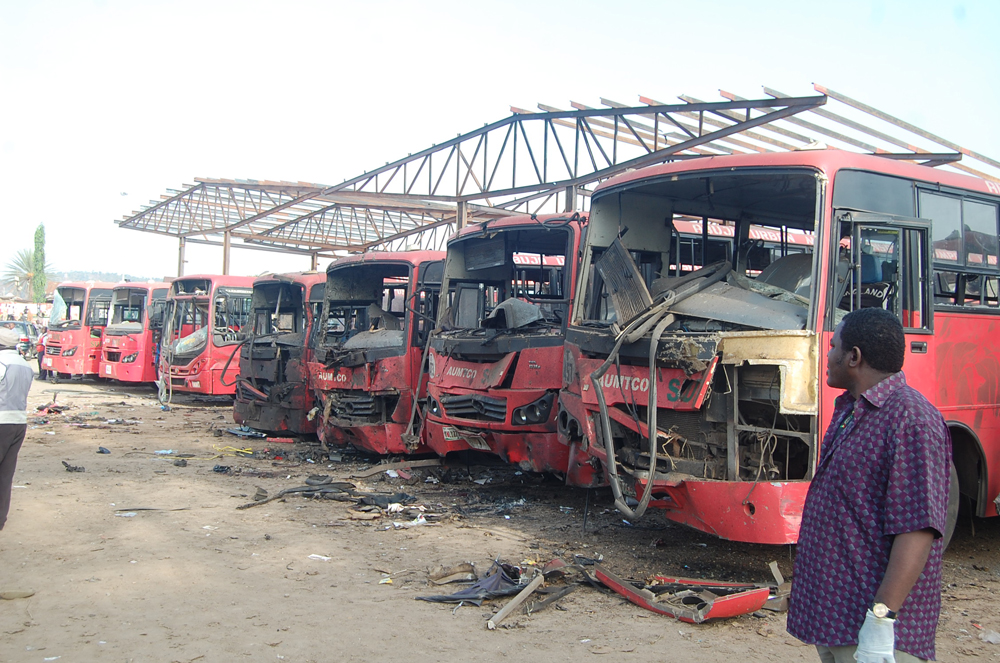 The car containing the bomb that exploded at Nyanya Motor Park, Abuja, on Monday, was driven to the park by two men in military uniform.

The Head of Operations of Isiyaka Nagode Enterprises, Salisu Mukhtar, disclosed this in an interview with one of our correspondents in Abuja on Thursday.

Mukhtar also said that the staff of the company had been questioned by the police.

He stated, “Somebody that slept there told us he was there when two men in Army uniforms entered and parked a car there.

“Two of them came in two cars. They parked the car and left in the other car around 2am. The person that saw them could not challenge them because they were in military uniform. They left in the second car.

“When he woke up around 5am, he still found the car there. Because he was disturbed, he sent one of his boys to our office but we had not come by then. The bomb exploded when the boy he sent was returning and he died in the bomb blast.”

According to him, the FCT police command has begun investigation into the incident, adding that they (the management of the park) did not witness the bomb blast.

He said, “They (police) quizzed us about the incident but we told them we were not there when the thing happened.”

Mukhtar told our correspondent that seven of his men died in the bomb blast.

“We have seen their corpses. They are in the mortuary now. Seven of them including loaders and one task force member are dead.”

One of our correspondents learnt that a trader at the terminal saw the car being driven into the park.

It was gathered that a trader, who was awake when the two men arrived in separate cars had been making useful statements to security agencies in order to unravel the mystery surrounding the bomb blast, which had claimed 89 lives with 257 others injured.

Our correspondent learnt that the trader had also been invited by Army authorities to extract statement from him.

When contacted, the FCT Police Public Relations Officer, Altine Daniel, said the investigation into the blast was being handled by the Force Criminal Investigation Department.

Mba, however, did not respond to calls to his phone and a text message sent to him.

When our correspondent contacted the Director, Army Public Relations, Brig.-Gen Laleye Olajide, he described the claim as a falsehood which should be dismissed.

Olajide said that those making the claim were only on a mission to destroy the image of the Nigerian Army.

Olajide wondered why those making the claim did not say it when the explosion occurred on Monday.

He said, “Why did they not say so in the beginning when the explosion occurred if it was true?

“Why did they not say it at the time. This thing happened how many days ago, it happened since Monday and I have not read it anywhere. People said they even recovered the bodies of the bombers, they did not say the bodies were recovered with military uniform.