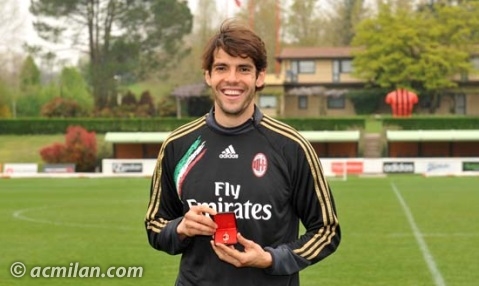 31 years old AC Milan midfielder, Ricardo Kaka not too long ago indicated his interest to play in the USA but it seems all that is about to change. Kaka has made 300 appearances for AC Milan and was presented with a medal to mark to mark the 300 appearances milestone by Milan CEO, Adriano Galliani on Friday against Chievo.

On that occasion, Galliani praised Kaka’s input thus far and stated he would love to see the Brazilian stay at San Siro.

“To have reached this milestone is something truly extraordinary,”

“The hope of the club and all of us is that we will still be here to celebrate appearance number 400, 500 – and beyond.

“Ricardo is truly in the hearts of the Milan fans. You can still give so much to this jersey. Few others have played games of the quality that you have produced here in Milan.

“My compliments on behalf of the club and president Berlusconi,” Galliani told the club’s website.

Kaka also spoke about his excitement over the milestone and his hope to feature for Milan another 300 times. In his words:

“The sentiments expressed in the speech made by Galliani are reciprocated because the feelings that I have for this club, for this shirt, for former and current team-mates are true and from the heart.

“I hope to be able to make just as many more appearances. Thank you.”