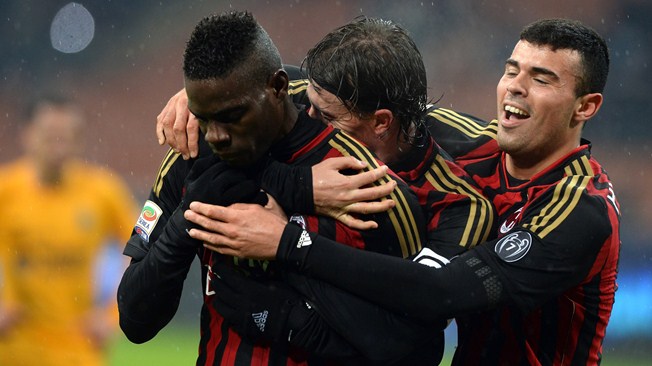 Forget the tears! Mario Balotelli is happy at AC Milan. It has been rumoured that the controversial Italian might be offloaded in the summer but he insists he is happy at Milan

Before Balotelli’s arrival in Milan, former Italian Prime minister and AC Milan owner, Silvio Berlusconi had labelled the player, ‘A rotten apple’. Reports in December had it that Berlusconi wanted Mario sold in the Winter transfer window, a claim which was denied by the club.

Balotelli on his part is enjoying life under new coach, Clarence Seedorf despite rumours still lingering that he may be sold in the summer

“I have spoken with him about situations with the team and the things that I must do on the field,I’m happy.”

“Seedorf is a great champion and it’s a pleasure to listen to him. He was also a great player. I hope that everything goes well.” Balotelli told Marca

Balotelli has recently been linked with a move to Premier league side, Chelsea where he will reunite with his former boss, Jose Mourinho. In the summer, the truth will eventually unfold.