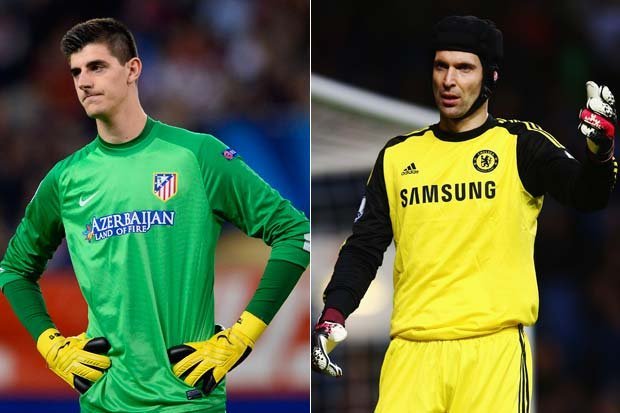 Despite calls from some quarters for on-loan Chelsea goalkeeper, Thibaut Courtois to return to Chelsea next season and possibly displace current first choice, Petr Cech, the latter has revealed he is not threatened by the chances of the former.

Cech has made it clear he fears no competition from the Atletico Madrid goalkeeper. Some recent reports also have it that Courtois may still spend next season on loan at Atletico.

Either ways Czech international, Petr Cech is unfazed by the prospects the Belgian’s return may present.

“If, on the first day of pre-season, Thibaut Courtois is here, he is here,”

“If he is not, he is not. It does not change anything. I will still have to do better than whoever else is here, to keep my place.

“It doesn’t change anything for me. You could ask John Terry or Gary Cahill about the very promising French central defender bought by the club.

“If he comes back and he’s better than me, credit to him, well done to him, but who knows? I’m not afraid. I’m not a fool to think I’ve been here 10 years and I’ll be here another five, just because.

“I am not playing because my name is Petr Cech. I’m playing because I’ve been playing well and because the manager thinks it improves the team with me in goal. I’ve never had a manager who would just put me in the goal because everybody was used to seeing me there.

“Are you good? Are you not? I’m not crazy to think in another 10 years I will just be playing. There will come a day when somebody comes along who is better than me. That’s it. But my everyday fight is to avoid that as long as I can. This is football life. Let’s see.”