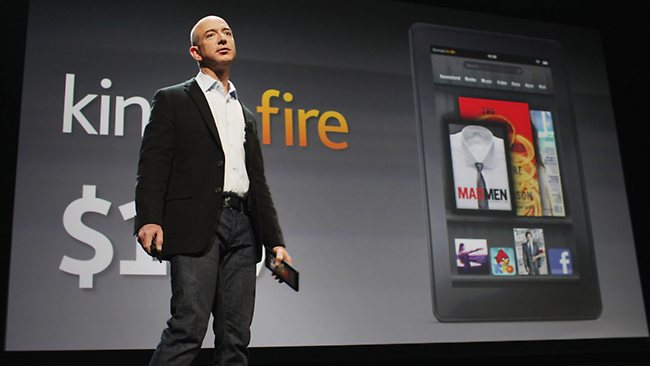 Called Amazon FireTV, the new hardware allows users to stream TV shows and movies from Amazon as well as other services such as Netflix, directly to their TVs. Amazon announced the device will start shipping from today, for 99 US dollars.

Unique for a set-top box, the FireTV also comes with a game controller, allowing users to play video games without a console, instead using the box to stream the game to your TV. Amazon announced that a large number of the games available will be free to download. This will cost an additional 40 dollars to have alongside the set-top box.

At the launch in New York, Amazon’s Peter Larsen said, “We need to invent and simplify on behalf of customers. State of the art power in the service of simplicity. This thing’s tiny, it’s incredibly powerful and it’s unbelievably simple.”

Set-top boxes work by connecting your TV and the internet, enabling users to stream TV shows and movies from the internet, using services like Netflix.

The box has a feature called ASAP that builds a list of items you will want to watch next based on what you are currently watching. The FireTV also supports Whispersync, a feature that enables users to start watching a programme on the Kindle Fire tablet, and then pick it up from the same place on the FireTV.

As well as offering streaming services, the set-top box also contains apps like YouTube which users can access directly through their television. The FireTV also supports full HD and comes with a custom remote control for users to navigate around the interface. The remote has a built-in microphone that allows users to speak into it to search for items within the different apps.

The device is designed to be a direct competitor to the Apple TV, a similar device from the Californian technology giant. But Amazon are keen to carve their own space in the market. The new Fire TV contains a photo feature that enables users to take a picture on their smartphone and automatically upload it to Amazon via the Amazon Cloud Drive app.

Fire TV has has a setting called X-Ray which syncs with your tablet to provide you with information about the shows and movies you’re watching, as well as displaying song lyrics when music is playing.

The launch comes on the same day the company was criticised by Greenpeace for not doing enough to support renewable energy. According to a new report, Amazon Web Services only use renewable energy sources for 15% of its generated power.

Here’s Why The Former US President, Jimmy Carter Believes The NSA Is Spying On His Email