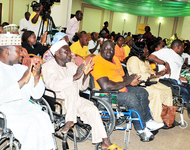 The Senate in Abuja on Thursday passed a bill that will legally protect persons with disability from discrimination.

Sponsored by Sen. Nurudeen Abatemi-Usman (PDP-Kogi), the bill seeks to integrate such persons into the society and establish a commission for persons with disability.

The bill, titled “Discrimination Against Persons with Disabilities (Prohibition) Bill, 2014’’, prescribes a fine of one million Naira for corporate bodies and N100,000 or six months imprisonment or both for an individual who contravenes the law.

Sen. Adamu Gumba (PDP-Bauchi) presented the report of the Senate Joint Committee on Sports, Social Development and Women Affairs on the bill.

Gumba, who is the Chairman of the joint committee, said that over 10 per cent of Nigerians had disabilities.

“Over 10 per cent of Nigeria’s population is said to be disabled by sheer providence or accident and these people are daily confronted with several challenges.

“One of the most prominent among these challenges is gross marginalisation occasioned with discrimination on the basis of their infirmity.

“Therefore, one would agree that without necessary legislation, the challenges that these set of people encounter would be difficult to overcome,’’ he said.

Gumba recalled that the sixth National Assembly had passed a similar bill but the president withheld his assent.

He said that it was suspected that the president withheld his assent because the Federal Government planned to rationalise its agencies to reduce the cost of governance.

He said that the current initiative took cognisance of the position and attempts to propose a small agency that would be cost effective.

During the clause by clause consideration of the bill, the Chief Whip of the Senate, Sen. Hayatu Gwarzo (PDP-Kano), objected to the joint committee’s amendment of clause six.

Clause six was amended to provide that “from the commencement of the bill, all future public buildings and structures either moveable or immovable should be made accessible to persons with disability.”

Gwarzo argued that the clause in the original version of the bill which called for a transitory period of five years within which all public buildings and structures be made accessible to persons with disability should be retained.

The clause generated a lot of debate but eventually the senators voted to retain the original clause.

The bill states that anyone who approves or directs the approval of a building that contravenes the building code will be liable to a fine of one million Naira or two years imprisonment or both.

The joint committee also amended clause 30 which stipulates that five per cent employment be reserved in all public organisations for persons with disability.

The Senate took into cognisance the fact that some organisations might have only two employees.

The clause was amended to read that any organisation which had up to 50 employees should reserve five per cent slot for people with disability.

The Senate also approved that the Director-General of the National Pension Commission should be a person with 15 years experience with adequate qualification in pension matters.

The senators gave the approval when they began clause by clause consideration of the report of the Committee on Establishment and Public Service.

Further consideration of the report was adjourned to another legislative day.