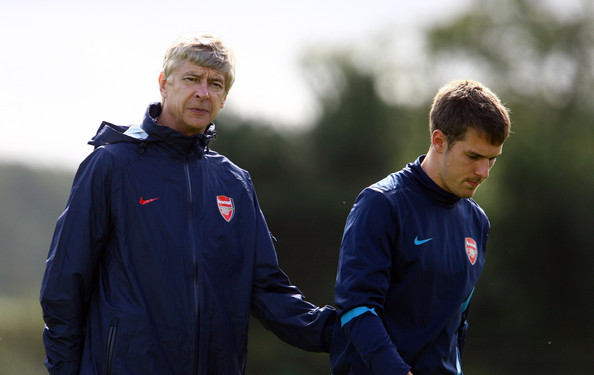 Arsenal midfielder, Aaron Ramsey may return to action in a fortnight as stated by Arsenal manager, Arsene Wenger. Ramsey has been out of action since Boxing day. Arsenal is currently facing injuries problem with star players, Mesut Ozil,  Laurent Koscielny and Jack Wilshere also out.

Aaron Ramsey has been billed to comeback on two occasions before now but they both failed. Wenger was speaking after Arsenal’s 2-2 draw with Swansea on Tuesday.

“It’s difficult to fight with half of the team out,”

“None of them [Ozil, Ramsey, Wilshere and Koscielny] are close to coming back. Koscielny is out for a while, after that Ozil is at least two to three weeks.

“Ramsey is maybe the closest. Maybe two weeks, but he’s had little setbacks. Sometimes scar tissue will bleed a little bit and we have to slow down again.

“When a guy has a tendon injuy in a very sensitive place it’s difficult. You always have to push, but not too far.”