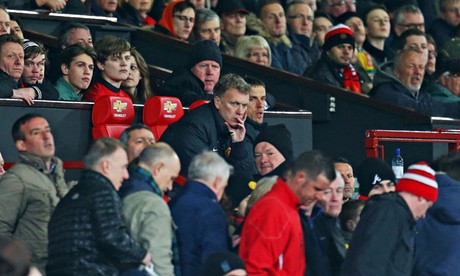 There is a possibility that under-pressure manager, David Moyes may lose his job at Manchester United. The Scot is becoming a very unpopular figure among Old Trafford faithfuls. They have been public statements that Moyes would at least get a second season as manager but things seem to have changed.

Manchester United lost 0-3 to city rivals,Manchester City at Old Trafford and this is now termed United’s worst season in the premier league era.

We hear Manchester United’s key-decision makers are shopping for a replacement for the Scot who was handpicked by his predecessor, Sir Alex Ferguson

Manchester United board has already handed Wayne Rooney a club-record contract renewal and a transfer fee for the summer but there is still the skepticism about Moyes not being fit for the job.

The Red Devils’ form since Christmas has been horrible.

At the end of United’s last game to City, The ‘Chosen One’ banner which affirms Ferguson’s selection of his country man in May and usually located at the Stretford End of Old Trafford was being guarded by stewards as fears rose that angry Manchester United fans will tear it up.

Too-Late? Aaron Ramsey May Return To Action In A Fortnight