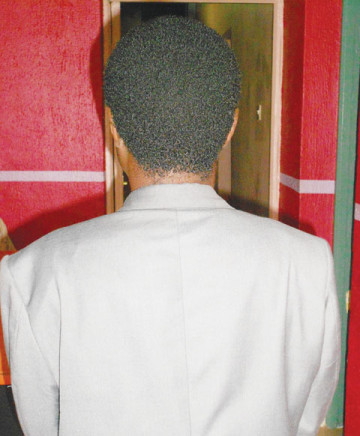 Thompson Emuche (not real name) is a sad man. At 24, he has a dilemma that he’s afraid to share with his family and friends.

Emuche, a lawyer, is gay. He says sexual abuse by an older male, when he was growing up, altered his sexuality.

Fighting back tears, Emuche recounts his story: “I did not set out to be gay. I do not believe I was born gay; I was abused by an older neighbour when I was young.

“I grew up in a good Christian home. My dad was a traveller and he was never around. So, my mother played a major role in the upbringing of my siblings and I. I had an amazing upbringing, as I never lacked anything. My growth intellectually was above my age, I guess that’s why I am able to remember the things that happened when I was five years old.”

He recalls that he was initially introduced to the act of oral sex at a very tender age.

“He used to take me to hidden corners of the staircase, and compelled me to carry out the act on him. He was living with his elder sister. I was in early primary school then, while he was about finishing secondary school.

“As a young and naïve child, the act thrilled me; but I didn’t know what it meant. He was close to my family; I guess that was why my family did not suspect anything,” he says.

According to Emuche, the neighbour left town after he completed his secondary education but the act influenced his sexual attraction to the male sex.

“It gave me a wrong impression of sex and sexual activities in later years. I didn’t get into the act fully, until I got into the university,” he says.

“Between the period of primary school and finishing secondary school, I never had any encounter with a guy; neither did I know there was such thing as being gay, even though I was very brilliant in school. I remember a few guys in secondary school hitting on me, but I never knew what it meant. I just laughed over it,” he adds.

Emuche’s sexual awareness and orientation came to light when he gained admission into the university.

He says, “I eventually gained admission into a university in the northern part of the country. It was far from home. I started getting advances from fellow guys. That was when I became fully aware of the gay scene, but I never knew how it worked. I had my first sexual encounter when I got to my third year in the university.”

After a brief pause, and silence, he returns to his story: “I had a secret admirer right from my first year. We lived in the same hostel and were in the same faculty. Our paths crossed severally and we got talking in second year. That was the first time he told me he was gay and wanted me to be his partner.

“To be frank, I was not interested in the act; so I subtly told him off. He was surprised that I did not raise an alarm or embarrass him like other guys would. So he begged for us to remain friends, so that I could help him academically, since I was better. I never knew he had his agenda.”

Continuing his story, Emuche says, “We became friends in school, and he was overly generous and nice. He would buy me things and give me cash gifts. I accepted them from a friend, not knowing he had his motives. He was actually waiting for the best time to strike.

“One day, in my third year in school, I went to his room to iron my clothes, because I had no power in my room. He was alone and asked me to pass the night. Since that wasn’t my first time, I innocently accepted to pass the night. Then at midnight, he manifested his acts.”

With a tinge of regret, he says, “That was the night I had the first sexual encounter, which would later destroy my life. I was not happy with myself, even though I did not go all the way the first time. But being young and exuberant, my curiosity got the most part of me. I hated him for seducing me, even though I could have said no to his advances. I began to explore, I became randy and promiscuous.

“I am not proud of the things I have done. I never imagined my life would turn out like this. In the course of my escapades, I contracted a sexually transmitted disease (which he didn’t disclose) and I am living with it.

“I wish I could turn back the hands of time to when I was growing up. I believe that abuse fuelled my attraction to the same sex, but I could have chosen not to go into the act. I took a risk and it cost my life.”

Emuche says the news would break his parents’ heart, and he is not prepared to tell them yet.

“That would mean dropping a bombshell. It could kill my parents. I do not plan to tell them now, until I am emotionally stable.

“I know they love me and might understand my predicament since the damage was done in my childhood. I have been battling with this and I believe it is my fight,” he says.

Emuche adds that his elder brother is aware and was ‘disappointed’ when he found out. “He could not believe I was involved in such acts, because everyone looked up to me as a good person.

“He wanted to transfer music from my phone to his. Then a text message dropped in my box, which he read. At first, I denied it when he confronted me, but he was smart. I had no choice but to open up to him. He was speechless, and angry with me for keeping the information from him for such a long time, since we were close.

“He made me promise to stop, which I did, but the damage had already been done as I had contracted the disease. I felt disappointed and embarrassed. He promised to keep it a secret, as long as I gave up the act. I told him how everything started, and he was dumbfounded.

“He is my elder brother, and the only one I could have told, because we are close. I have three other younger siblings and they are not aware. I can’t imagine letting them know,” he adds.

Emuche says being gay is very rampant, but he didn’t talk about his gay partners. He also declined shedding light on the details of his activities with his partners.

“I cannot talk about those activities. I feel ashamed remembering them. Being gay is now a common thing, but that does not make it a good thing. Sometimes, the people you do not expect to be gay are gay, even when they are married or very masculine.

“I am no longer interested in them. I deleted their contacts after my brother confronted me. I feel sorry for myself, because I have not lived the kind of life people thought I lived. Now I have a scar I will live with for the rest of my life.

“I have lived with hatred for the neighbour that abused me (I do not know his whereabouts now) and for the friend that seduced me. But the hatred cannot cure me,” he adds.

Emuche says his orientation affected his relationship with girls. “Presently, I do not have a girlfriend, but I used to have one in secondary school and another in the university, although the first one was not serious.

“The second relationship started when I got into the university, but ended in my final year, because I lost focus and she got tired of the lack of attention. I look forward to having my own family, but no right-thinking lady would want to marry someone like me. I still wish I could have a wife and kids,” he concludes.

Founder of Centre for Sex Education and Family Life, Mr. Praise Fowowe, says there may be different reasons for people’s sexual orientation, but that child abuse is the main cause of same-sex orientation.

He says, “There are different theories about why people are gay or lesbians. The theory of nature says gay people were born gay, while the theory of nurture teaches that people develop the orientation with time.

“I am in the field most of the time. I have observed that all the gays and lesbians I have worked with had their sexuality tampered with at some stage in their life.

“People who turned out gay today, at one time in their life were subjected to some kind of dysfunctionality. Most of them have come to accept that they were born that way, because of what they have been told. It is a conditioning of their mind, and it’s false. When someone consistently believes false information, it becomes his truth.”

Fowowe says there is a need for valid professional therapists to handle the cases.

“A typical gay wants a father. They need to stay with them till they pick up a new habit where they lost it as children. Creating a support system around them is also very crucial,” he says.