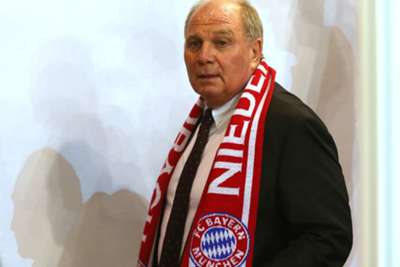 Uli Hoeness has resigned his position as president of Bayern Munich after being sentenced to jail for tax evasion.

The 62-year-old received a three-and-a-half year sentence from a German court on Thursday, and revealed on Friday that he will not appeal against the verdict.

Hoeness was initially charged with defrauding authorities of €3.5million, but his trial – which took place in Munich – revealed the actual figure to be €27.2m.

Prior to the legal proceedings, Hoeness disclosed the details of his evasion last year, a move his defence believed would mitigate any punishment.

Yet, after three days of hearings, Hoeness’ sentence was administered after he was found guilty of seven counts of tax evasion.

He has subsequently relinquished his role as Bayern president, and tendered his resignation from the club’s board.

“After talks with my family I have decided to accept the judgment of the District Court of Munich II in my tax matter,” Hoeness said in a statement on Bayern’s official website.

“I told my attorneys not to go in revision. This is my understanding of decency, attitude, and personal responsibility. Tax evasion was the (biggest) mistake of my life.

“I would like to avert damage to of my club. FC Bayern Munich is my life’s work, and always will be. I’m staying connected to this great club and its people in other ways.

“I thank my personal friends and supporters of FC Bayern Munich for their support.”