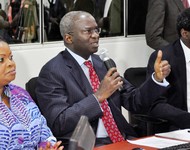 About 18 persons are feared to have lost their lives in a boat mishap which occurred in the early evening of Tuesday at a canal on 4th Avenue, FESTAC Town, Lagos.

Eye-witnesses told the News Agency of Nigeria (NAN) that the incident happened at about 19:30 hrs and that one of the six survivors rushed to the FESTAC Police Station to alert the police.

NAN learnt that although the Police immediately mobilised to the accident scene, they could not be of much assistance because those who rushed there were not from the Police Marine Department, who could have led the rescue efforts.

An eye-witness who did not want his name in print, told NAN that local divers then had to be mobilised to help with the rescue efforts.

Mr Jola Ogunlusi, President, Festival Town Residents Association (FTRA), told NAN that the rescue efforts had to be suspended at 02:00 hrs on Wednesday morning, after the recovery of 11 bodies from the canal.

“Local divers had to be mobilised to lead the rescue effort. Of the 24 passengers who were said to be on board the boat, only six were able to help themselves. We could only recover 11 bodies and the search for the other seven bodies will continue today,” he said.

Ogunlusi added that the rescue efforts were organised by the Lagos State Emergency Rescue Agency, which also moved the recovered bodies to a public mortuary.

The FTRA president recalled that in 2001, the Lagos State Government had mobilised to the site to start work on the development of a bridge across the canal at 4th Avenue and 13th Road on 6th Avenue, “but the project was politicised and they had to abandon the site”.

He also said that in 2004, the Federal Housing Authority (FHA) put the cost of the bridge at N240 million.

Ogunlusi, who said he was in the company of the Chairman, Amuwo Odofin Local Government Council, Mr Ayodele Adewale, at the scene of the incident until the early hours of Wednesday, added that the boat was reportedly overloaded because the passengers were all rather anxious to cross the canal.

“The makeshift bridge has been built more than four times in the past, but once there is a heavy rainfall, it is usually washed away.

“People do not listen to instructions warning them to desist from using the boats or the makeshift bridge to cross the canal again.

“Both the Amuwo Odofin Local Government Council and the FTRA have consistently warned them on that. About three years ago, three persons lost their lives in a similar incident on the canal,” he said.

Ogunlusi recalled that community leaders of 6th Avenue have organised a “Keke Marwa” route to take people from 6th Avenue to wherever they wanted to go to in FESTAC Town, but some remained stuck to the boats on the canal.

Ogunlusi added that the FTRA would now write to the Hon. Minister of Lands, Housing and Urban Development, and the FHA, to take urgent steps to build a bridge to link 42 Road in 4th Avenue and 13th Road of 6th Avenue.