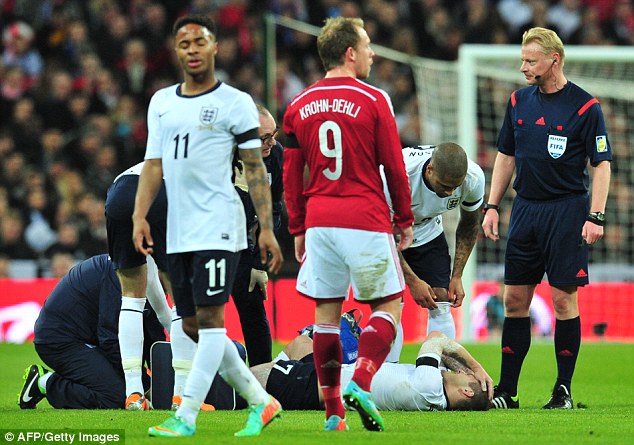 Arsenal and Three Lions midfield stallion, Jack Wilshere will be out of action for six weeks after suffering a hairline fracture of his left foot during England’s friendly against Denmark on Wednesday.

Daniel Agger had tackled Jack strongly thirteen minutes into the game but the Arsenal player played for about 60 minutes before being substituted.

This injury may prove a major setback for Arsenal for whom Wilshere had been integral part of all season. A statement on the North London club’s website read:

“Jack Wilshere has sustained a hairline fracture to the navicular bone in his left foot,”
“Wilshere suffered the injury during England’s international match with Denmark on Wednesday night at Wembley Stadium, in which he played 59 minutes.
“Following initial scans carried out by the FA on Wednesday night, further investigation by Arsenal’s medical team has discovered a crack to a small bone in Jack’s left foot – the navicular, an area of his foot which has not been previously injured.
“Jack will now require a period of approximately six weeks’ rehabilitation, before starting to regain his match fitness.”

Suarez: There Is No Real Secret To My Successful Combination With Sturridge