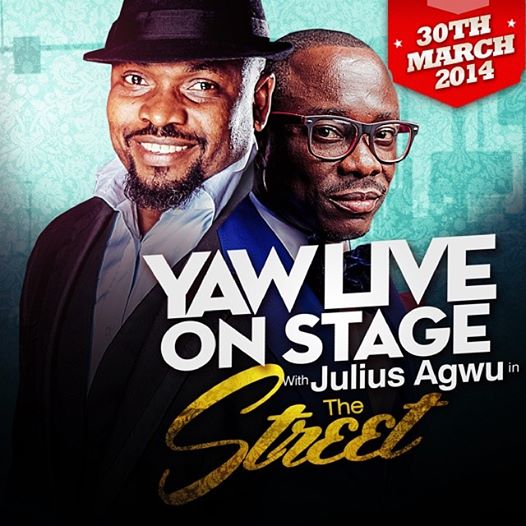 Eko Hotel & Suites will be playing host to the upcoming edition of the concert scheduled to hold on Sunday March 30, 2014.

Over 25 A-list entertainers’ will join Yaw on stage for a series of mind-blowing performances. Some of which include; MI, Sound Sultan, Kcee, Iyanya, J Martins, Dr Sid, Waje, Ill Bliss, Sean Tizzle, Chidinma, Alibaba, Tee A, Gbenga Adeyinka amongst many others.

“The past four have been amazing, this year promises to be electrifying! My colleagues are excited to be part of this and we are already working to deliver never seen before performances.” Says Yaw.

“Yaw’s Live on Stage is truly a first of its kind concert where you have a stage play, comedy and musical performances at once. I am looking forward to showing the world other sides of me,” enthused Julius.

The much anticipated comedy event, which made its debut in 2009, has featured an endless list of Nigeria’s biggest comedy acts from Koffi, Jude Orhora, Mc Abbey, Owen Gee, Funke Akindele and a host of others.

Last year’s show saw Yaw and Funke Akindele in a play production known as The Bar. This year, Yaw Live On Stage will follow a similar style with the foremost OAP playing alongside Ace comedian, Julius Agwu in a stage play known as THE STREET.

THE STREET which is written and directed by Obi Martins and Emmanuel Uduma, is a satirical play piece centered on memorable events that has occurred in Nigeria from January 2013 to February 2014, rendered in style and rhythm, speaking for and against.