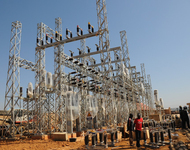 The Bureau of Public Enterprises has approved 42 companies to bid for 10 National Integrated Power Plants in the country.

The BPE said in a statement signed and issued on Monday in Abuja by its Head, Public Communications, Mr Chigbo Anichebe, that the bid would take place on March 7.

It stated that the decision was reached at a recent joint meeting of the National Council on Privatisation chaired by Vice-President Namadi Sambo, and the Governing Board of the Niger Delta Power Holding Company.

“At the meeting of the opening of the financial bids, 42 pre-qualified bidders out of 66 bidding consortia for the 80 per cent equity in the 10 NIPP power plants was approved.

According to the statement, 66 proposals were earlier received on Nov. 8, 2013 from prospective investors interested in the 10 NIPP plants, but were short-listed to 42.

“An inter-agency evaluation team, including security agencies met from Nov. 12 to Nov. 22, 2013 to evaluate the proposals.

It was stated that in order to be deemed technically qualified, bidders must meet the financial and quality of business plan that was set out by the committee on privatisation.