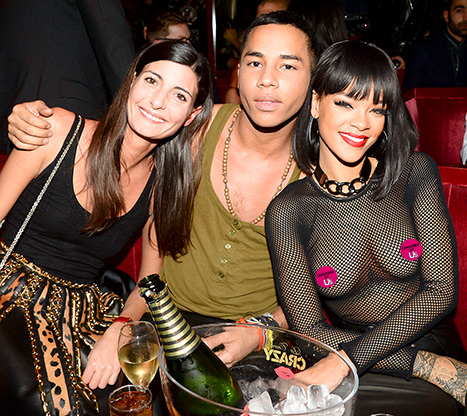 Rihanna flashed partygoers at the after-party for Balmain’s fashion show in Paris, France, on Thursday, Feb. 27, in a see-through mesh top. The singer went without a bra, thus fully exposing her nipples through the sheer shirt.

She finished the scandalous look with a more demure, high-waisted leather pencil skirt with a bow detail. The “Diamonds” singer, 26, wore her new Cleopatra-style bob straight and sleek and added drama with flirty lashes and a bold red lip.

Currently the face of Balmain, RiRi arrived to the brand’s after-party covered up in a sparkly black blazer. Once she took it off, though, the Bajan chanteuse became the sensation at the famed Crazy Horse cabaret, giving guests like Jessica Alba and creative director Olivier Rousteing full view of her breasts – nipple piercings and all. The see-through blouse also showcased her tattoo of the goddess Isis on her ribs, which she got in honor of her late grandmother Dolly.

Paris Fashion Week isn’t the only reason the “Pour It Up” singer is in town: She’s also been spotted bonding with rumored beau Drake, who invited her to his concert at the Palais Omnisport de Bercy on Monday, Feb. 24, followed by a get-together at Club 77.

However, unlike her flashy appearance at Balmain’s after-party, Rihanna kept a low profile. “She didn’t want to be seen at all,” an onlooker reveals to Us Weekly. “She kept her head down and charged through to the back of the club with her friends.”

The Theft Of The Night, A Poem By Yaw Frimpong [Read]