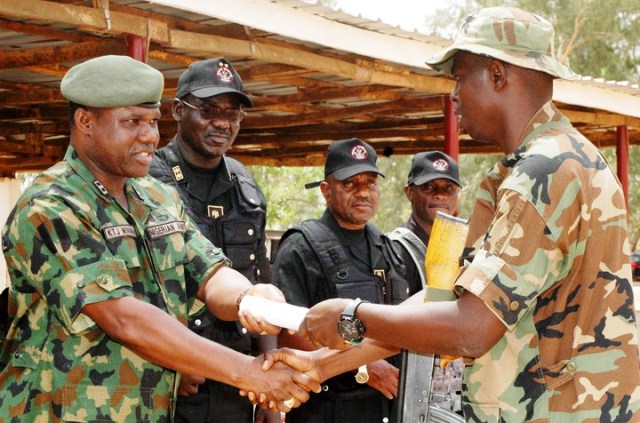 Madagali, where about 50 persons died in the attacks by the insurgents two weeks ago, is a border community with Cameroon.

Local officials and military sources said the insurgents ambushed the soldiers while on their way to foil another attack by the group following a tip-off.

Efforts to contact the Brigade Commander of the 23rd Armoured Brigade, Yola, Brig.-Gen. Rogers Nicholas, were unsuccessful as he was said to be on a special assignment with the command Public Relations Officer.

However, a top military source, who spoke on the condition of anonymity, confirmed the attack.

The source said that the soldiers carried out a raid on a Boko Haram hideout in the porous border villages, which resulted in a prolonged gun duel with the insurgents.

The source dismissed the claim that the soldiers were ambushed.

He said, “During the attack, a fierce battle ensued between our soldiers and the insurgents which lasted several hours and both side lost men.”

Chairman, Izhe Madagali Local Government Area, Mr. Maina Ularamu, confirmed the incident but could not ascertain the number of casualty.

He confirmed that the soldiers were attacked while on a mission to repel attack by another splinter terrorist group.

Ularamu said, “The soldiers were going to repel a planned attack at Izhe border village when they were ambushed by the heavily armed insurgents.

“As I am talking to you, most villagers at the border areas have since fled to Madagali, the administrative headquarters, for fear of possible attacks.

“We are calling on the government to deploy more troops with armoured tanks in the area. These Boko Haram insurgents have more sophisticated weapons than the soldiers.”

According to the council boss, the insurgents were armed with anti-aircraft and anti-tank weapons mounted on their vehicles.

Residents said that some colleagues of the killed soldiers were firing indiscriminately into the air in protest after the incident.

Hospital sources also confirmed that corpses of the killed soldiers were deposited at a Federal Medical Centre, Yola.

“Nine corpses of the killed soldiers are deposited here in Federal Medical Centre, Yola. We only counted nine for now,’’ said the hospital sources.

The corpses of the nine soldiers were said to have been deposited in the mortuary of the Federal Medical Hospital in Yola.

Military authorities were also said to be making frantic efforts to contact the deceased’s relatives on Thursday.

Checking The Abuse Of ”red cap’’ And Igbo Chieftaincy Institution