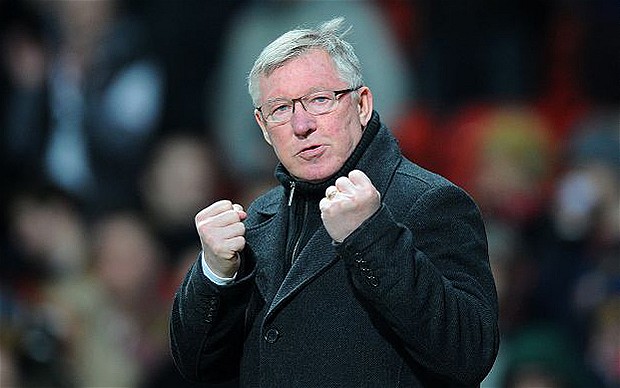 With the departure of Sir Alex Ferguson from the touchline, is the fear factor gone for some referees? He certainly appeared to have an intimidatory effect on some refs with his legendary rants and watch pointing.

It has long been speculated that the “red devils” enjoyed preferential treatment in the past from certain top refs operating in the Premier League.

There are many instances when it appeared as though they were getting the “rub of the green” from referees in 50/50 fouls. This year the opposite seems to be the case.

The recent Stoke City versus Manchester United is a case in point.

Even the most neutral football follower could see that the foul on United’s Robin van Persie was a penalty.

What the referee has to decide in situations like this is – was the player impeded and/or/ prevented from challenging for the ball. The video evidence speaks for itself.

Why then didn’t the referee blow for the foul and award a penalty kick? Let me put it another way – if that type of foul had occurred outside the penalty area – say in the middle of the field – would the referee have given a free kick? The answer is a definite yes.
In fact free kicks are given for much less contact. So why then didn’t he award a penalty kick? Only he and the Lord Almighty knows.

The action, or more to the point inaction, by the referee on this occasion leaves us all open to accusations of bias, favouritism, and blatant cheating from fans of the “offended” team and mutterings of disbelief from others.

RvP is generally is not a “diver” unlike some of his fellow professionals who spend more time on the ground than on their feet.

Last year it appeared that Manchester United were “getting everything” from referees, while this year they appear to be “getting nothing.”

What is the reason for this?

Is it because Sir Alex Ferguson was on the touchline and exercised some sort of spell on the match officials?

Now that he’s no longer in charge at Old Trafford and the Sir Alex “fear factor” has disappeared, have the referees changed their way of looking at fouls perpetrated by and on Man United?

Which ever way it is there appears to be a bias against United this term.

Sometimes players can be victims of their own behaviour, or more to the point, misbehaviour. Luis Suarez of Liverpool is one. Ashley Young of Manchester United is another just to name two.

Many times we see players falling down at the slightest touch and rolling around on the ground in apparent agony. The case of Chico Loris of Swansea this last weekend when he succeeded in getting Andy Carroll of West Ham red carded.

What’s most annoying is that referees are allowing themselves to be fooled by this nonsense.

This is a new phenomenon that has only crept into the game in the last few years and is spreading like wildfire. Even children are now replicating what they see their idols doing and no one is prepared to put a stop to it.

I have no doubt that teams have a department within their clubs who are teaching their players how to dive and blatantly cheat in order to gain that added advantage for their team. My problem is that the match officials are allowing it to happen.

Are we now lacking the balls (excuse the pun) to make the decisions that need to be made? Are we scared of the repercussions from the players and managers? Are we afraid of what the papers will say about what we did, or did not do?

Referees are the guardians of the game. We have the power to stop it. We have the means and “tools” to do something about it.

I firmly believe that need to get back to basics. We shouldn’t be called referees; we should be called reactionaries because that’s what we are. We see a situation and we react to it.

How many times have you heard “the ref was great – hardly heard the whistle.” Well my friend that’s because you behaved yourself. No foul – no whistle, simple as that.