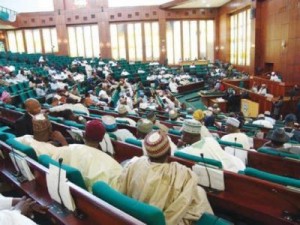 The ruling Peoples Democratic Party (PDP) Thursday reclaimed its majority position in the House of Representatives following another defection of a member from Nassarawa state from the All Progressive Congress (APC).

Rep David Ombugadu, in a letter read by the Speaker Aminu Waziri Tambuwal, said he decided to dump his Congress for Progressive Change (CPC), under which he was elected for PDP, after consulting with his constituency.
With this latest defection, the PDP now has 174 members against the 172 of the APC which restored it back as the majority party in the House.
Tuesday’s defection of another member from Nassarawa state Rep Joseph Haruna Kigbo from APC to PDP tied the two parties on a short-lived equal numbers of 173.
Moments after the announcement by the Speaker, PDP members shouted “PDP!” in triumph, with some members accompanying the lawmaker to the PDP leaders in the House for introduction.
However, the APC lawmakers stood up, chanting “APC, Change!” which took the Speaker some minutes before he could restore order in the House.
Ombugadu’s defection brought the total number of cross-defections in the House to seven, with PDP benefiting with higher number of four members, all from APC, since the resumption of the House from the year-end break, two weeks ago.
So far, APC, who was the majority party before the break, only received two members from each of PDP and DPP since their resumption from the break.

Related Topics:politicsPDPAPCNational Assembly
Up Next

The Govt You Serve Is Anti-Development, Anarchist – APC to Maku