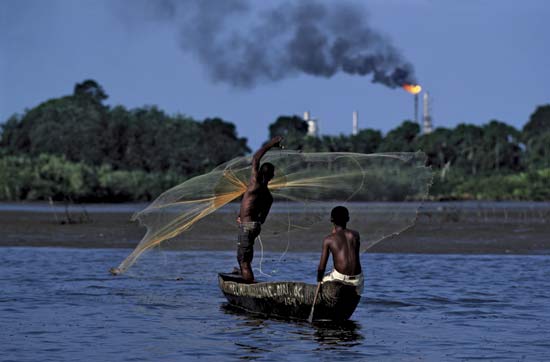 Fishermen along the Bayelsa coastline have lamented the impact of the November 2013 oil leak from the Brass Oil Export Terminal belonging to Nigerian Agip Company, saying it had affected them negatively.

Egbe said the development had brought untold hardship to peasant fishermen in the state because they were no longer making catches.

“The spill occurred in Brass Local Government Area of Bayelsa and over 3,000 members of my association have been compelled to suspend their economic activities,” she said.

According to her, whenever a large-scale spill occurred, the fishermen automatically suspended fishing to make way for a clean-up of the waters by the tidal waves.

“The fishes and the fingerlings were all killed by the crude; dead fishes of all sizes littered the coastline here in November and December 2013.

“The few that survived have migrated into the deep sea out of our reach.

“My people are suffering and they can’t do their fishing because if they do, their tools will be spoilt,” she said.

Egbe said that the situation had lead to scarcity of fish in Bayelsa.

She expressed regret that the oil firm responsible for the spill had not shown enough concern for the plight of the victims since the incident occurred.

The chairperson said that the fishermen had notified the oil firm about the impact of the oil leakage on them, but had yet to get any feedback.

Eni, an Italian energy firm and parent company of NAOC, had said in an online statement that it was investigating the cause of the oil leak.

Efforts to reach the spokesperson of Agip, Mr Tajudeen Adigun, through his mobile telephone and text messages failed.