Bola Tinubu: The APC Is An Ideology Rooted In The Welfare Of The Poeple 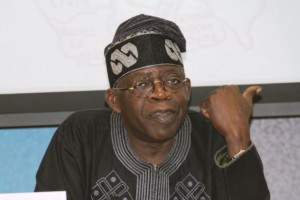 Today, history again beckons. It beckons to all of us that are witnesses to do something to continue to promote the Yoruba cultural tradition. The Yoruba remain till today the most sophisticated of all the peoples and this is with great validation and justification. Our culture and tradition are rounded, grounded and well rooted. Our culture spreads across Nigeria, the West African sub-region and as far as South America and Latin America, i.e Cuba. Our educational prowess, political sagacity and oratory excellence places us miles ahead of other groups and sets us apart from them. Yet we remain very cosmopolitan, accommodating and respectable.

All of these qualities and attributes couldn’t have been possible if the traditional rulers who are the custodians of our culture and tradition had not played their role. They stood up to assaults and wars from other tribes. They engaged the colonial agents and never for once allowed the subjugation of the Yoruba nation nor its values and cultural heritage.

The Olubadan of Ibadan land was one of the most outstanding institutions of that time and which today is still held in high esteem. I am glad and indeed proud as a Yoruba son and second as a Nigerian to be part of this initiative to erect a befitting Palace for His Imperial Majesty, the Olubadan of Ibadan. The Olubadan literally means Lord of Ibadan Land and is central to the emergence, establishment and growth and the continued relevance of the Yoruba culture and tradition. Since 1820 under Oba Okunade till 1930 under Olubadan Abbas and till the current reign of HRH Oba Samuel Odulana Odugade the role and activities of the Olubadan as an institution is central to the history and development of the Yoruba nation and indeed of Nigeria as a country.

What we are doing today is significant considering the re-investment in the culture and tradition that has not failed us. It is a reaffirmation of our support for a royal father that has not sold us out but one that has carried on with integrity. I salute the Olubadan of Ibadan. May your reign be long and peaceful. Amen. Under your reign, your people have enjoyed peace and freedom. I thank you. Your Royal Highness.

You have also stood against the marauding forces of destruction and confusion. Though you are not a politician, you have remained steadfast and committed to democratic principles. Your support for progressive politics and commitment to your people and a good society is undeniable. I pray that the Yoruba nation will continue to enjoy the leadership of Royal fathers like you. The Yoruba nation is proud of all of its leaders who have since departed and who passed the torch to the likes of the Olubadan. Our current leader s have also not disappointed. They continue to serve their people and Nigeria well. And for those who dare say the Yoruba have no leaders, we have only one thing to say to them- they are hypocrites, mischief makers and rabble rousers who know nothing about Yoruba land and Yoruba people. Their knowledge of history is shallow. It will be better for them to take their eyes off our decent home and spend time cleaning out the rot in their home.

Let me make a quick and important detour here to talk about the Governor of Oyo state, Senator Ajimobi of the APC. He is a true son of the soil. A pride to the Yoruba race and to the nation as a whole. An achiever who marches on against all odds. We are witnesses to the great initiatives he is taking and great strides he is making in his governance of Oyo State. Under his administration, Oyo state is at the cusp and point of monumental change. Governor Ajimobi has embarked on a journey that will return Oyo state to the glorious years of development witnessed in the first Republic and parts of the second Republic. I urge us all to take this journey with him.

Governor Ajimobi has plugged into the Progressive ideology of our party, All Progressives Congress, APC. This is an ideology rooted in the welfare of the poeple, broadly shared prosperity for all and democratic good governance that treats all Nigerians as equal regardless.

We in the APC have ourselves embarked on a historic journey to bring change to our people and give life to their finest aspirations. It is a commitment that is unshakable and a journey we intend to take to the final destination. Across the Southwest we see evidence of good governance and impactful leadership. This is what we want to replicate across the country particularly all APC states. All APC governors, sixteen of them have bought into this vision and are evidently working to better the lives of their people. Ultimately, APC will take control of the center and turn the ship of the Nigerian state around from the whirlwind and troubled waters to safer waters. Be it known that APC is Government in Waiting, GIW. This we promise.

Therefore, today, I urge you all to donate generously to this noble cause of building a befitting palace to a trusted, reliable and committed ruler and institution. By so doing, we safeguard our culture and tradition and protect the future of generations yet unborn. I thank you all.

Speech delivered by Bola Tinubu during the launch of the ultra modern palace of the Olubadan of ibdan on January 25th, 2014.