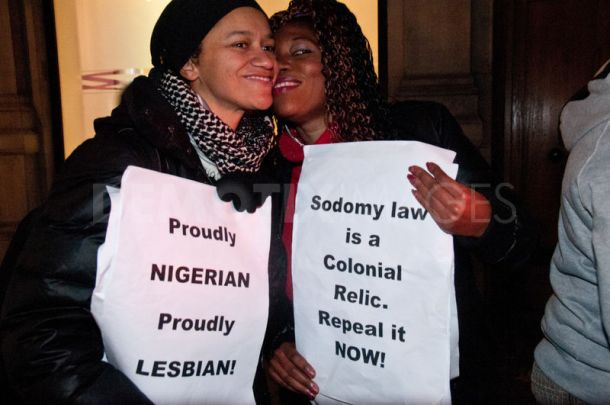 Support for President Goodluck Jonathan for signing the Same -Sex Marriage Prohibition Bill into law cuts across religious and ethnic boundaries.
Dissenting voices however came from the western countries, the international community and groups in the forefront of protecting gay rights.

The act which criminalises same- sex provides inter alia: “Persons who enter into a same-sex marriage contract or civil union commit an offence and are each liable on conviction to a term of 14 years in prison.

“Any person, who registers, operates or participates in gay clubs, societies and organisations or directly or indirectly makes public show of same-sex amorous relationship in Nigeria commits an offence and shall each be liable on conviction to a term of 10 years in prison.”

The Catholic Archbishop of Abuja, John Cardinal Onaiyekan, praised President Jonathan for signing the bill into law in spite of external pressure to withhold assent.
“I commend our National Assembly and Mr President for resisting all the pressures and enacting a law against homosexuality.

“Signing the bill into law by President Jonathan in spite of pressures from within and outside the country should be commended by all and sundry.

“We have every right to order our social life in any way we think it should go. Our social life should not be organised on the basis of what others think.

“The church accepts people as they are, we condemn homosexuality, Nigeria is an independent country and we do not beg for food, he emphasized.

The Northern Traditional Rulers’ Council also commended the National Assembly and President Goodluck Jonathan for the passing and signing into law, the bill on same-sex marriage.

The traditional rulers, in a communiqué signed by Alhaji Zubair Jibril Maigwari, condemned attempts by the international community to dictate to Nigeria on issues bordering on morality.

“The council strongly commend the National Assembly and Mr President for courageously passing the law against same-sex marriage, in spite of international pressure against doing so, which the council considers as a landmark legislation.”

The Jama’atu Nasirl Islam (JNI), in a statement signed by its Secretary-General, Dr Khalid Abubakar Aliyu, condemned same-sex marriage and also praised Jonathan for assenting to the bill criminalising the practice in Nigeria.

“JNI commends the National Assembly for passing into law the bill banning same-sex marriage in Nigeria and applauds the President for signing the bill into law in spite of pressure from various quarters, particularly the western world.”

Mr John-Kennedy Opara, the Executive Secretary, Nigerian Christian Pilgrim Commission (NCPC), said that promoters of same-sex marriage, are enemies of humanity, noting that the practice if allowed would lead to extinction.

“It leads to destruction; how do you intend to achieve continuity,’’ he queried.

According to him, lesbians and homosexuals do not believe in procreation and should not be allowed to adopt other people’s children.

However the praises for Jonathan and the National Assembly ended in the home front, as the international community was not happy with Nigeria’s posture on same sex marriage.

“We are not trying to impose our morality or our culture, Nigeria has its culture and own approach to issues.

“But we are concerned about the human rights and the freedoms of all Nigerians, as enshrined in Nigeria’s own constitution and as enshrined in international conventions to which Nigeria is a party.

“Our concern is that this act contravenes some of those provisions and puts at risk some of the fundamental freedoms that all Nigeria people should enjoy,’’ he said.

According to Hague, the UK is a close friend of Nigeria, but it is disappointed that President Jonathan has given his assent to a bill which will further criminalise same-sex relationships in Nigeria.

“The UK opposes any discrimination on the basis of sexual orientation.’’

The UK foreign secretary said that the British government would continue to lobby at the highest level on the issue.

He said that the act undermined the democratic reforms and human rights protections enshrined in Nigeria’s 1999 Constitution’.

“Even before this act was signed into law, consensual same-sex relationships were already criminalised in Nigeria, violating rights to privacy and to freedom from discrimination,’’ she said.

Pillay said that the violated human rights were protected by the Nigerian Constitution and the International Covenant on Civil and Political Rights, which Nigeria has ratified.

“Disapproval of homosexuality by the majority on moral or religious grounds does not justify criminalising or discriminating against LGBT persons.

“Indeed, the defence of human rights often requires the State to step in to protect the rights of members of minority communities from the prejudices of the majority,” Pillay said.

Aken’Ova said that police had drawn up a list of 168 wanted gay men, adding that 38 of them were arrested recently.

Even though the world is now a global village, the president acted on the wishes of the people by signing the Same-sex Prohibition Bill into law.

The international community should respect the wishes of the people.