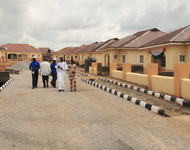 A 43-year-old widow, Mrs Ngozi Eze, was among the 109 accommodation seekers allegedly defrauded by a 34-year-old estate agent, Taibat Aruna.
She wept uncontrollably before an Ikeja Magistrates’ Court, where Aruna was arraigned on a 30-count charge.
Aruna allegedly obtained N14 million from 109 accommodation seekers, including the widow, under the pretext of letting out to them, a bedroom apartment at Ojo, Lagos.
Weeping and shaking her head, Eze lamented, “a woman that claimed to be a mother inflicted this untold hardship on me and my children.
“I suffered frying bean cake (akara) at Agboju junction, Festac Town, to gather the N220, 000 that I paid her for the apartment.
“I have been homeless since my husband died about five years ago,’’ she lamented.
Unlike Aruna, whose case was still on-going, an Ikeja High Court, on Nov.18. 2013 sentenced one Michael Olabameji for defrauding 100 accommodation seekers to the tune of N29.8 million.
Justice Adeniyi Onigbanjo, who sentenced 42-year old Olabameji to 15 years imprisonment, noted that he inflicted untold hardship on his victims and deprived them of their hard-earned money with a false promise.
Olabameji was arraigned before the court by the Economic and Financial Crimes Commission (EFCC).
The cases of Aruna and Olabameji are not isolated, as there are numerous cases of accommodation-related fraud before many Lagos State courts.
Analysts attribute the high accommodation fraud in Lagos to the city’s high population, put at about 21 million.
A Lagos-based lawyer, Mr Deji Ariyo, said that people capitalised on the housing deficit in Lagos to embrace fraudulent practices.
“A lot of people have compromised moral standards and embraced fraudulent practices all in the bid to make quick money.
“They capitalise on the unemployment rate in the country, the housing need of the citizens and the economic challenge to perpetuate their nefarious acts.’’
He said that the judiciary, often referred to as the last hope of the common man, should punish accommodation fraudsters adequately.
“The judiciary should ensure that the rights of citizens are adequately accommodated, and judgments handed down without fear or favour, but in accordance with the law.”

Sharing similar sentiments, a cleric, Mr Samuel Ayotunde, attributed the high rate of accommodation-related fraud to lack of fear of God.
“More people are becoming self-centred, greedy and insensitive to the plights of others. They betray public trust by inflicting undue hardship on unsuspecting members of the public.

“The way out of all these vices is to be upright, have a conscience and embrace the fear of God in our relationship with each other.”
Mr Babajide Adams, an estate agent, stressed the need for people to engage the services of professionals to assist them search for accommodation.
“Those saddled with the responsibility of managing the industry must practice it with the highest standard of professional ethics.
“The citizens must have a great level of confidence in those that are offering them service in the real estate sector,” Adams noted.
In order to check the activities of accommodation fraudsters in Lagos, the Lagos State Real Estate Transaction Department (LASRETRAD) was established in 2012, to regulate the activities of estate agents.

Mr Jimoh Ajao, Special Adviser to Lagos State Governor on Housing, advised residents to contact the department, under the Ministry of Housing to ascertain the authenticity of estate agents they patronise to avoid falling into wrong hands.

According to him, the department is mandated to monitor and regulate estate agency practice, issue licences to professionals and prosecute agents suspected to have violated the law.

“The government will not fold its arms and allow such unscrupulous agents to bastardise a noble profession; hence, there is the need to sanitise this field of economy to bring back the confidence of the people to the profession.

“It is a source of concern that estate agency practice seems to be open to everyone, and dubious persons are taking advantage of this to fleece innocent members of the public.

“Activities of the fraudsters are so alarming that even the properties of the Lagos State Government are being marketed.”

A businessman, Mr Tony Nwankwo, who was defrauded of N2.2 million by an estate agent, appealed to the Lagos State Government to take adequate measures to check fraud in the real estate sector.

“I paid N2.2 million for an apartment at Maryland, Lagos. I later heard that four other people paid for the same apartment.

“The estate agent got an elderly man to impersonate the owner of the house to make it credible.

“We later knew that the apartment was being renovated for the actual owner to move into when he arrives from the U.S.,’’ he said.

A lawyer, Mr Boniface Ohemu, said accommodation fraud would continue if the housing deficit in the country was not addressed.

“Housing is an essential need; people will continue to fall prey to con men because there is a high demand for accommodation.

Analysts believe that the surest way to reduce accommodation fraud is by addressing housing deficit in Lagos, and indeed the entire country.