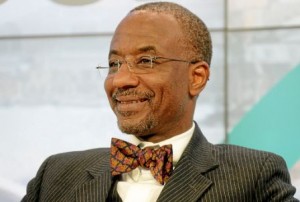 Prominent Nigerians who were concerned about the implication of the misunderstanding between the Presidency and the Central Bank of Nigeria governor have intervened and brought the dispute to an end.

A source familiar with the matter told Daily Trust last night a number of influential Nigerians who were concerned about the cost of such a dispute between President Goodluck Jonathan and Sanusi Lamido Sanusi have convinced the President to reconsider his decision to ask for the governor’s immediate resignation.

Jonathan had summoned Sanusi to the Presidential Villa on Monday, where he accused him of leaking the letter on missing oil proceeds to former President Obasanjo, and therefore asked him to resign.

The source told Daily Trust yesterday in order to stem the negative implication of such untidy departure of the CBN governor on investor confidence and the economy generally, the two sides have resolved the issue and have agreed to work together for financial stability in the remaining period to the end of Sanusi’s tenure on June 1.

When Daily Trust contacted him on the matter, the CBN governor said all issues between him and the Presidency have been resolved and he will continue to work together with the President whose office he respects, even as he looks forward to a smooth handover to his successor in June.

“Sometimes these things happen but are resolved quickly and I have the highest respect for the office of Mr President,” he said.
“I look forward to a smooth hand over and the President and I will work together to ensure that whoever he appoints to succeed me inherits the robust system we have worked to ensure in the last few years.”

The CBN governor did not want to be drawn into a discussion on what one newspaper reported yesterday as heated telephone conversation with President Jonathan.
He, however, said what he had was a face-to-face meeting but he had no discussion with the President on the need for any pre-retirement leave.
On his decision to serve for only one term as CBN governor, Sanusi said, “Myself and the President have always understood that I will not seek another term and will give notice of that in March.
“I believe the CBN has delivered on its mandate as it fixed troubled banks and recapitalised them, set up AMCON, kept inflation down and generally laid down the foundation for further work by the next governor. As for me I will like to go and face a different challenge’’
He added: “There is nothing else for me after this term.”
Sanusi wrote Jonathan a letter in September alleging that about $49.8 billion oil proceeds were not remitted to the central bank by the Nigerian National Petroleum Corporation (NNPC).
The uneasy relationship between the governor and the Presidency hit a new low with the leakage of that letter, and got even worse when former President Obasanjo referred to the governor’s letter in his own damning communication with President Jonathan, whose office suspects that the CBN was the source of the leak.
But Sanusi had reportedly denied the leakage, arguing that copies of his letter were available at the Finance Ministry and to several officials in the Presidency.
On the dispute over figures of unremitted oil revenues, the CBN governor told Daily Trust yesterday that CBN received new information from the NNPC just before the New Year and they have questions they will still ask the oil company as the focus of the CBN is to establish how much accrues into the federation account. Explanation for what happened to unremitted funds is between the NNPC and the fiscal authorities, he added.