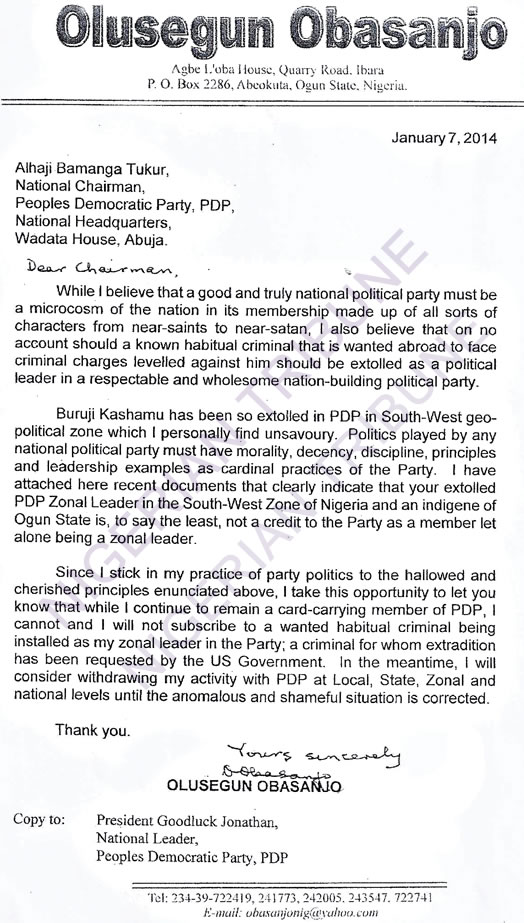 President Olusegun Obasanjo has written yet another letter and this time around, he writes the National Chairman of the Peoples Democratic Party (PDP), Alhaji Bamanga Tukur. In the letter, he gave a notice of his withdrawal from the activities of the party. Obasanjo copied President Goodluck Jonathan (National Leader of the party) in the letter.

In the letter, dated January 7, 2014 the retired General said he is withdrawing from all activities of the party because the PDP had been negating the principles of morality, decency and discipline in its decisions, especially as they affect the South West where he comes from.

According to a source at the national secretariat of the party, the letter was received in the office of Tukur on Wednesday, 8 January, 2014. President Jonathan was expected to have gotten his by Thursday
The three paragraph letter reads:

“While I believe that a good and truly national political party must be a microcosm of the nation in its membership, made up of all sorts of characters from near-saints to near-satan, I also believe that on no account should a known habitual criminal that is wanted abroad to face criminal charges levelled against him be extolled as a political leader in a respectable and wholesome nation-building political party.
“(…Names witheld) has been so extolled in PDP in South-West geo-political zone which I personally find unsavoury. Politics played by any national political party must have morality, decency, discipline, principles and leadership examples as cardinal practices of the party. I have attached here recent documents that clearly indicate that your extolled PDP Zonal Leader in the South-West zone of Nigeria and an indigene of Ogun State is, to say the least, not a credit to the party as a member, let alone being a zonal leader.
“Since I stick in my practice of party politics to the hallowed and cherished principles enunciated above, I take this opportunity to let you know that while I continue to remain a card-carrying member of PDP, I cannot and I will not subscribe to a wanted habitual criminal being installed as my zonal leader in the party; a criminal for whom extradition has been requested by the US government. In the meantime, I will consider withdrawing my activity with PDP at local, state, zonal and national levels until the anomalous and shameful situation is corrected.”

Bamanga Tukur Pleads With Obasanjo To stay In PDP

Suntai Arrives Abuja To Discuss His Return With President Jonathan