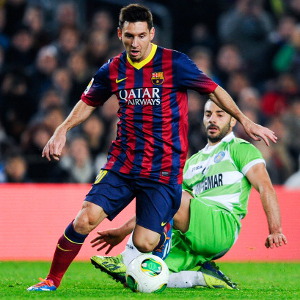 Lionel Messi came off the bench and scored twice on his return from injury and Cesc Fabregas also netted a double as Barcelona strolled to a 4-0 win at home to Getafe in their King’s Cup last 16, first leg on Wednesday.

Messi was given a rousing ovation by the home fans when he replaced Andres Iniesta in the 64th minute at the Nou Camp, the World Player of the Year’s first appearance since straining a thigh muscle in November.

Dominant Barca, who rested a number of regulars, were already two goals ahead by the time the Argentine forward entered the fray after Fabregas headed them in front in the eighth minute and added a penalty in the 63rd.

Messi looked fit and sharp during his half-hour on the pitch and his return is good news for coach Gerardo Martino with Saturday’s La Liga clash at title rivals Atletico Madrid looming.

His first goal came in the 89th minute when he collected a loose ball in the penalty area and slotted into the corner from close range.

His second in the third minute of added time was a trademark dash in from the right wing and he left the Getafe defenders trailing before lifting the ball high into the net and bringing the adoring home faithful to their feet.

There was a festive atmosphere despite the giant stadium being less than half full and former Barca coach Tito Vilanova, who is battling the cancer that forced him to step down at the end of last season, was watching from the stands.

If they successfully negotiate next week’s second leg in Madrid, Barca will meet Rayo Vallecano or Levante, who play their first leg on Thursday, in the quarterfinals.