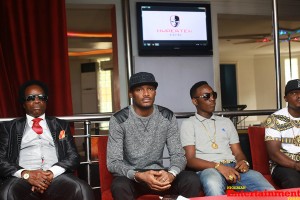 It is a thing of shame, ladies and gentlemen, that in this reservoir of talent that is Nigeria, there are few joint albums and mixtapes being put out to allow the listening public the pleasure of enjoying a combination of that talent. This, in a day and age where classic albums like Nas & Damian Marley’s Distant Relatives, Kanye West and Jay Z’s Watch The Throne are being churned out in faraway America, which we so mirror, is at once disgraceful and distasteful.

There may have been ModeNine and producer, XYZ’s Alphabetical Order and underground duo, Kid Konnect and Kahli Abdu’s Bandits EP in recent years but someone, nay, some acts need to step up to the plate and give Nigerian music some darn good albums.

Afrobeat co-founder and ageless drummer, Tony Allen was one-third of the supergroup, Rocket Juice and the Moon that delivered an eargasmic album of the same title in that genre, a few years ago. With features from Erykah Badu, Fatoumata Diawara and M.anifest, it is undoubtedly one of the best Afrobeat albums of time. If Sinzu and Ikechukwu would rather channel all the energy that goes into showing off bling on social network feeds and beating ex-buddies bouncer-style respectively, we’d have had a decent joint effort from them since.

No use flogging dead rappers horses, so we present to you ten collaborative albums that could spark up the life of 2014 and make it go bonkers.

Jargo was everyone’s favourite but the reborn post-Chocolate City version of the man has been a joy to behold. From dishing delightful records in the latter half of 2013 to performing them, the second son of Abaga has been like a snake that has shed its skin – finer and more mature. His delving into conscious music must surely be making Afrobeat lovers salivate, especially after the 10/10 collaboration with the king himself, Femi Kuti on 3rd World War. A joint album – free EP even – would be the hallmark of Jagz’ transformation and allow him transcend onto a global stage, with the recognition and other perks to boot.

Nobody may not have been the biggest hit off MI2: The Movie but it was a glassy showcase of what could be when royalty decides to inter-breed. Conscious music may not be the major forte of the duo but they rock it well whenever they attempt to as Only Me and Crowd Mentality prove. We see the album’s title in our minds already: System Crash.

Sossick must miss Da Grin so and with the deification of the late Akogun, it is only right that another step into attempt to fill his shoes and keep the union alive. Arguably one of Nigeria’s top hiphop producers even if he’s slacked in recent times, Sossick can kick a mean hook too, just like on Ghetto Dreams. Having produced most of Alaga Ibile’s same-name joint, we anticipate he will join the rapper who has matured into a heck of a fine specimen of a rapper in the studio for another round.

The most distracted Nigerian rapper and the most underrated Nigerian rapper have previewed any future collaborative projects already on Sauce’s mixtapes, Money Long and Da RipOff. I’m Going In off the latter showcases both emcees battling for supremacy, yet complementing each other. May 2014 be the year they put aside the drama of disgruntled former associates and drop a mixtape together. Amen!

We hate to admit this but Oga Boss, rhymeless flow aside, does make good music when these other two labelmates are in the same equation. Illie’s sophomore album owes its’ progression in no small measure to them, along with Phyno and XYZ of course. We envisage that with his reputation for being a rap head and astute businessman, Nigeria’s Rick Ross will channel his supposed inner Diddy Combs and put out a collaborative project. And that Chidinma will not be docile on it.

Thanks to Wale for bringing these two back to their roots – pardon the Yoruba pun. One hopes that the yet-to-be-released collaboration will seriously unite the feuding former partners and that Don Jazzy can once again domicile the method to the madness of Banga Lee within a number of songs. With the trademark hoarse voice that the Mavin frontman is famous for, gaining more presence on recordings last year, a song with at least one whole verse each from both men will be nothing short of magical. A whole album? Think Tongolo 2.0. We can’t wait.