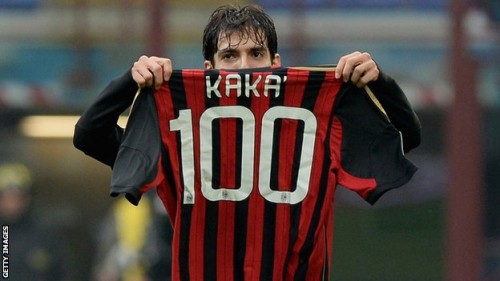 Former World Footballer of the year and Brazilian playmaker, Kaka has reached the 100 goals milestone for AC Milan of Italy. The deeply religious Kaka who is currently enjoying his second spell with the Italian giants achieved this recently after netting two goals against Atlanta.

The 31 years old had left AC Milan to join Real Madrid of Spain in 2009 before returning to Milan.

He got his first goal in the game as a result of a counter-attacking move while the second was a close-range strike. Young teenager, Bryan Cristante scored Milan’s third in the game.