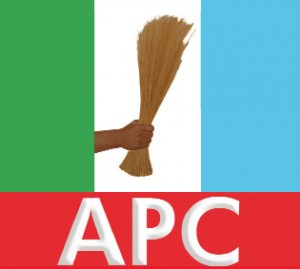 The All Progressives Congress (APC) has described as a cruel irony the accusation of inconsistency and double standards levelled against its leaders by the presidency, saying an incompetent and flip flopping administration has no moral authority to point an accusing finger at anyone, least of all the patriotic and
respectable APC leadership.

”The presidency is behaving like a punch-drunk boxer who, clearly dazed by a barrage of right-on-target punches from the opponent, ran to the ropes and started punching the air, when he should be thinking of a comeback strategy,” the party said in a statement issued in Lagos on Monday by its Interim National Publicity Secretary, Alhaji Lai Mohammed.

”This presidency is definitely dazed from its own failings, the collapse of the party that sired it and the opprobrium being poured on it daily by Nigerians who are grossly disappointed at its woeful performance and clear lack of direction. We are therefore not surprised that in addition to incompetence and cluelessness, it has
now resorted to twisting facts,” it said.

APC challenged the presidency to tell Nigerians when the party called on President Jonathan to respond to former President Olusegun Obasanjo’s scorching letter, as claimed by the presidency on Monday.

”What we said, in our press release dated Dec. 13th 2013 and entitled ‘APC to Jonathan: Don’t take Nigeria back to Abacha days’, was that President Jonathan should address the allegations that he has put 1,000 Nigerians on a ‘political watch-list’, in addition to training snipers at the same facility where Abacha’s killer squad was trained.

”In order to show clearly that the presidency either did not understand our subsequent press release on the lettergate or has decided to distort our stand, we hereby reproduce the relevant part of the second statement we issued on Dec. 26th 2013, on the basis of which the presidency has misfired: ‘The party said while it is not interested in joining the fray over the issues contained in the letters written by both men, the decision by the President to go
personal in his reaction crossed the threshold of decency and brought the presidency – and indeed the country – into disrepute.

”’It said in other climes, the President would have simply issued a terse response to such a letter denying the allegations that border on national security, if any; as well as saying the former President’s observations have been noted, and that the government would study them and then engage with the former President in private, while assuring that the ship of state is on course’.”

On the accusation of inconsistency and double standards levelled against its leaders, the APC said the presidency was simply shooting the breeze.

”The problem with this presidency is that it still cannot get over the fact that our leaders, including Chief Bisi Akande, Gen. Muhammadu Buhari and Asiwaju Bola Tinubu, have decided to put their differences aside and make personal sacrifices to rescue Nigeria from the PDP death grip. The presidency cannot understand why the permutations of its fake political consultants, that personality clashes between Buhari and Asiwaju will not let the APC see the light of day, have failed.

”Also, they have been gripped with mortal fear that the leadership of the APC has reached out to all Nigerians, irrespective of their political leanings. They cannot understand that those who are genuinely committed to rebuilding a nation that has been made so fractious by a bungling ruling party must be flexible and accommodating, while holding on tight to their principles,” the party said.

It urged the Jonathan presidency to expend its energy on telling Nigerians why it should not be voted out in 2015 for running the most incompetent administration yet in our country’s history. It should explain to Nigerians why billions of naira have been squirreled away under its watch. It should tell Nigerians why they spent their Christmas and New Year holidays in darkness; why most of our qualified youth are unemployed, and why the government’s contrived economic growth has yet to result in economic development (that’s hoping they know the difference).

”These are the issues that should bother this clueless presidency, not whether the APC asked President Jonathan to respond to a letter or not. We are for issue-based engagements, not frivolity-based exchanges,” APC said.

Advertisement
Related Topics:APCPDPpolitics
Up Next