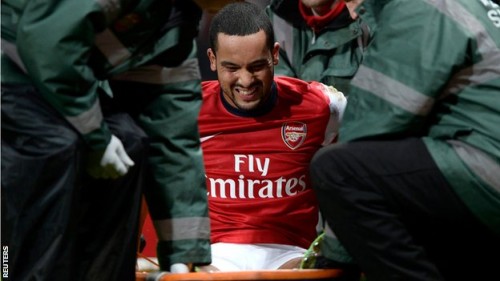 England and Arsenal forward, Theo Walcott will miss the World Cup. He has been ruled out for at least six months with a knee injury.

The 24 years old suffered the injury when his side defeated Tottenham 2-0 in a  FA Cup game on Saturday.

A statement from Arsenal reads:

“Theo has sustained a ruptured anterior cruciate ligament of his left knee.

“He will have surgery in the near future and is expected to be out for at least six months, thus missing the rest of the season and the World Cup.”

The injury comes as a huge blow to the English National team for which he has had 36 caps and contributes a total of five goals.

“Everyone at Arsenal wishes Theo a speedy recovery and we look forward to seeing him back on a football pitch as soon as possible.” the statement concluded

Moyes May Not Make Any Signing This January