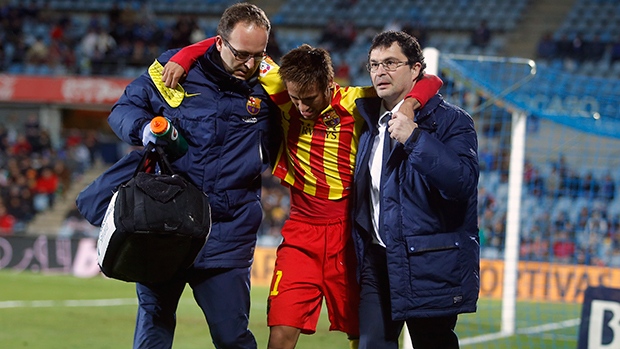 Lionel Messi and Neymar are ready to return for Barcelona against Getafe in the King’s Cup on Wednesday but coach Gerardo Martino has a selection headache with the fine form of Pedro and Alexis Sanchez.

Messi has been sidelined since mid-November with a hamstring injury and the last 16 first leg tie was earmarked for the prolific forward’s return ahead of the top of the table La Liga clash with Atletico Madrid on Saturday.

The Argentine has resumed training with Barca since returning from his recovery programme in Buenos Aires and Rosario and scored a hat-trick in a practice game on Friday.

He did not play in the weekend win over Elche but is set to get some game time as he works towards recovering match fitness.

Neymar was suspended for the final match of 2013, away to Getafe in the league, and then rested against Elche but in his absence Barca won 5-2 and 4-0 respectively with Pedro and Sanchez both notching hat-tricks.

“I’ve not decided who will now play against Getafe,” Martino told reporters.

“Whoever I choose there will be repercussions and people who agree and don’t.

“Pedro would win over any trainer and is the type of player who can deliver against any team. He can provide passes for goals, is good with both feet and pressures. It will be difficult to decide.”

Martino said Sanchez had “looked sharper” than Neymar in training and his decision to leave the Brazilian on the bench appeared to be justified with Chilean Sanchez hitting three goals against Elche.

“Having watched them over the previous days I was looking at who was in better shape. You can think it was for other reasons but some of the players returned later than others to training (after the Christmas break),” Martino said.

“I saw Alexis looked sharper than Neymar and I had to decide.”

Cup holders Atletico, level with Barca at the top on 49 points, overcame Malaga at the weekend and now face a tough cup game away to Valencia, who won their first game under new coach Juan Antonio Pizzi against Levante.

Real Madrid are at home on Thursday to Osasuna who held them to a draw in the league last month.

Lower division Alcorcon and Racing Santander will be hoping to cause an upset when they take on Espanyol and Almeria.

Moyes May Not Make Any Signing This January

Swansea Exorcises The Red Devils From The FA Cup