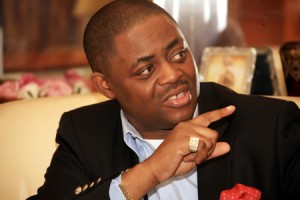 Chief Femi Fani Kayode, Nigeria’s Former Minister of Aviation has said that the incumbent PDP-led administration was on the brink of collapse.

Kayode a one time chieftain of the ruling PDP said he dumped the party to pitch his tent with All Progressives Congress (APC), which he described as a progressive party, instead of sinking with the PDP.

He said the PDP led by Pressident Goodluck Jonathan has lost focus.

He also challenged Major Hamza Al-Mustapha, the former Chief Security officer to the late Head of State, General Sani Abacha to come out and explain to Nigerians where he was on the day Chief Obasanjo forwarded his letter to President Goodluck Jonathan.

All Over Nigeria People Are Willing To Join APC – Kwankwaso