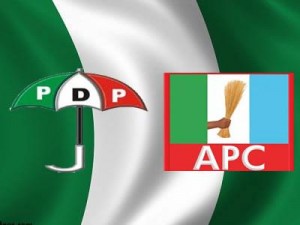 The South-West women leader of the ruling Peoples Democratic Party,PDP, Otunba Iyabo Odunmolorun Omotayo has defected with her supporters to the ruling party in Ogun State, the All Progressives Congress,APC.

The defection of the former Women’s Leader of the opposition PDP in Ogun was made public at ceremony held at the Ijebu-Ode palatial home of the woman, described as the strong woman of Ijebuland politics.

Addressing the crowd Thursday, Omotayo explained her decision to join the APC is because of the giant strides and laudable programmes of the present administration led by Senator Ibikunle Amosun.

Narrating her political journey to the thousands of supporters, she said “I have been in politics for so many years and my aims of venturing into it is to uplift women in politics and at every position I found myself,I have been making sure that women are not a push over.This government has done so much to women and this is part of the reasons why I am moving with my people to join the party so as to support in the mission to rebuild the State” .

She said she went into politics after her husband died in 1985 and went on to say that it was late Chief Bola Ige that introduced her into politics.
She explains her decision to dump the PDP.
“So,my decision to dump my former party and join the APC is a timely one and it was a decision taken by all my people and there is no going back”,she explained.

The former PDP women leader also the Iyalode Obaleke women age group of Ijebuland was received into the party by the acting Chairman of the party in Ijebu Ode,Alhaji Anibi and other party leaders in the local government.

PDP On The Brink Of Collapse – Fani Kayode