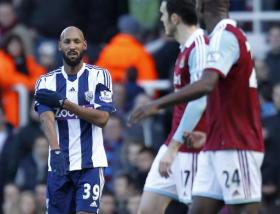 French striker Nicolas Anelka has agreed not to perform the controversial ‘quenelle’ salute that has been linked with anti-Semitism, his club West Bromwich Albion announced on Monday.

Anelka, 34, sparked a media storm on Saturday when he celebrated the first of his two goals in the 3-3 draw at West Ham United by putting one arm across his chest and straightening the other.

The gesture, popularised by French comedian Dieudonne, has been described by critics in France as an ‘inverted Nazi salute’, but Anelka insisted it was merely “a dedication” to the comic.

However, with England’s Football Association having launched an investigation into the matter, West Brom have asked Anelka not to repeat the gesture.

“Upon reporting for training this morning (Monday), Nicolas was asked by sporting and technical director Richard Garlick to give a full explanation about his goal celebration during which he again strongly denied intending to cause offence,” read a statement published on the club website.

“The club fully acknowledges that Nicolas’s goal celebration has caused offence in some quarters and has asked Nicolas not to perform the gesture again. Nicolas immediately agreed to adhere to this request.”

Related Topics:sportsAnelkaWest Bromwich Albion
Up Next