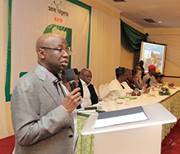 In the light of the season that could be regarded as the lettergate for Nigeria.

The General Overseer of the Latter Rain Assembly, Lagos, Pastor Tunde Bakare, has said former President Olusegun Obasanjo is guilty of the sundry allegations he leveled against President Goodluck Jonathan.

Obasanjo had in an 18-page letter leaked to the media accused President Jonathan of committing various forms of atrocities and also asking the President not to contest elections by 2015.

Pastor Bakare, during a sermon on ‘The parable of letters and the cacophony of voices,’ in his church said the former President’s letter to Jonathan painted a portrait of Obasanjo himself while he was in office.

Bakare wondered why the ex-president could “turn around” to blame Jonathan for any of his actions when Obasanjo “imposed him and Yar’Adua” on the nation.

The cleric faulted the morality of the letter, saying Obasanjo was as guilty of the allegations contained in his letter just as the person the letter was addressed to.

“Was it not the same Obasanjo that imposed (the late Umaru) Yar’Adua and Jonathan on the PDP and ensure that they emerged winners in the Presidential election? How can the same person be accusing Jonathan of wrongdoing? Besides, Obasanjo’s letter is just about himself; that is, he has written a letter that tells his own story.”

The cleric believed that the nation’s problems had its roots in the fact that “we have low people in high places.”

He added, “Shehu Shagari already decided that he wanted to be a Senator in the Second Republic; he had obtained and submitted his form for a senatorial seat. Then, they dragged him to be the President. Obasanjo was brought out of prison broke, but was sponsored and given money to become the President. In the same vein, Yar’Adua was about completing his two terms of eight years (as the Katsina State governor) and he just wanted to return to the classroom as a lecturer but they brought him to become the President, hiding his ailment from the rest of us.

“So, you have people, who ordinarily do not have any business in governance occupying sensitive offices. What do you want them to do? That is the roots of our problem.”

Bakare disclosed that he got cow gifts from the Presidency and the Ogun State Government during the Christmas, but appealed to the President to face the task of providing basic necessities of life for Nigerians rather than sending cow gifts.

“I was prevailed upon not to return the gifts like the late Gani Fawehinmi did to (Buba) Marwa, when Marwa was the military governor of Lagos State. I don’t eat such meat. That does not mean that I will not tell the President to face his work and do it well. We need good roads; not cow. We need water, power supply; not cow meat,” he said.

Presidency Outlines The Unprecidented Performance By Jonathan In 2013 [READ]