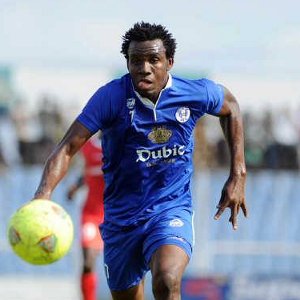 Sunshine Stars new boy, Kingsley Eduwo, has expressed happiness with getting a chance to train in the Super Eagles camp under head coach, Stephen Keshi.

The former 3SC man was one of three players dropped on Boxing Day as Nigeria prepare for the 2014 African Nations Championship (Chan) in South Africa. He was released alongside the duo of Bendel Insurance’s John Ikeleji and Eric Kwame of Plateau United.

But the ex-Gateway FC forward said getting a call to the camp for the Chan is a big boost to his fledgling career.

“I was one of the players dropped from the camp but I am very happy with the chance of being called up into the camp. For me, it was an opportunity to work with the national team coaches and the experience I got in the past days was really worth it.

“Some of the things I learnt in camp from the coach (Keshi) will help me in future and I’m going to apply them well. But I’m looking forward to another opportunity in future with the national team, so I’m ready to work hard to be there again,” said Eduwo to supersport.com.

Eduwo, who was sought after by Bayelsa United, Dolphins and Sharks before opting for Sunshine Stars, said his focus is now to hit the ground running with the Akure Gunners in the 2013/14 Nigeria Professional Football League (NPFL) season.

“I want to do well with Sunshine Stars in the league next season. I’m not putting myself under pressure by setting any target,” he said.

Sunday Oliseh: What Africa Needs To Win The World Cup