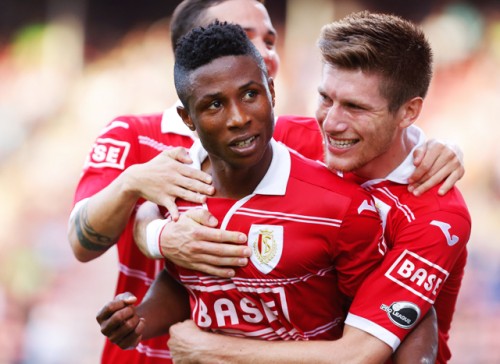 Nigerian footballer, Imoh Ezekiel was Man of the Match after bagging a brace as his club Standard Liege’s 5-1 defeated Kortrijk away in a Belgian Jupiler Pro League fixture

The 21-year-old had netted in the 13th minute to extend Standard’s lead, after left-back Van Damme had opened the scoring seven minutes earlier off an assist from Imoh Ezekiel at the Guldensporenstadion.

Senegalese veteran Elimane Coulibaly pulled a goal back for the hosts in the 55th minute, but Batshuayi restored Standard’s three-goal cushion on the hour-mark before Igor Rinck de Camargo headed in a cross from Ezekiel in the 77th minute.

Ezekiel, who has collected eight goals in 21 appearances for his club this season, earned 82% of the votes cast to decide the best performer of Friday’s tie.

It Is A Rumour! NFF Denies Plan To Hire Fitness Trainer For Super Eagles