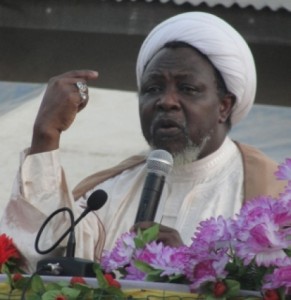 A report by Saharareporters indicate that members of Nigeria’s Shiite Islamic sect, which is led by Sheik Ibraheem Zakzaky, have claimed that some hired youths attempted to attack their leader’s residence in Zaria, a town near Kaduna, the capital of Kaduna State.

According to the sect, the attack left three of their members with serious cuts inflicted with machetes.

The alleged attack on Mr. Zakzaky’s home followed a reported clash on Thursday between Shiites and some youths in the area where the Shiite leader resides.

A source in Zaria named Mohammed Garba told Saharareporters that, but for the quick deployment of armed security operatives, the situation would have degenerated into serious widespread violence in the Gyallesu section of Zaria. Mr. Zakzaky resides in the area, which has also served as the location of the headquarters of his Islamic Movement for over 30 years.

In a statement issued by Ibrahim Musa, editor of its Hausa weekly newspaper, Almizan, the Shiites noted: “On Thursday a group of youths staged an attack on Sheikh Ibrahim Yaqoub Zakzaky’s house in Zaria, though [they were] repelled by some Muslim Brothers of the Islamic Movement. The clash started on Wednesday when a Muslim sister driving her car found out that the Banadeen Street in Gyallesu Quarters, Zaria she was about to [take] had been blocked with big stones, and when a brother was trying to pave [a] way for her, some youths attacked him.

Bello Aliyu, one of the traditional rulers in Gyallesu, did not return calls made from our New York office. A police source told SaharaReporters that security operatives were still patrolling the area to prevent any more outbreaks of violence.

Related Topics:violenceKadunaNigerian Shiites
Up Next