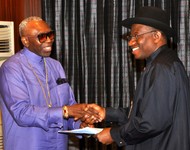 Nigerian pilgrims performing this year’s Christian pilgrimage to Israel on Thursday took a tour of holy sites in Galilee and Capernaum, where Jesus is believed to have begun his Ministry.

A correspondent of the News Agency of Nigeria in Jerusalem reports that the pilgrims first visited the town of Tapgha and prayed at the Church of Loaves and Fishes.

The place is considered holy because Jesus is said to have miraculously fed over five thousand people with just five loaves and two fishes, there.

The pilgrims also went to Capernaum, the home of St. Peter and his brother Andrew, which Jesus later made his new home and base.

They prayed in the Mensa Christy Church, which is built on the location where Jesus is believed to have given the key and power over the Church to Peter.

The pilgrims also took a tour of the Ancient Synagogue located in Peter’s house and visited the new church built above St Peter’s house.

NAN reports that the pilgrims then proceeded to the Mountain of Beatitudes where Jesus is believed to have delivered the Sermon on the Mount, a popular compendium on Christian living.

They later took an hour’s boat ride to Galilee city during which they sang and danced to popular Nigerian gospel music renditions.

NAN also reports that the pilgrims will continue their tour on Friday with visits to the Mediterranean Sea, Mount Carmel and Haifa, among others.