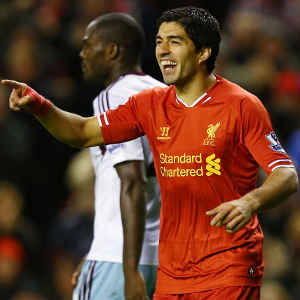 Manchester City midfielder James Milner says that his side will be facing one of the country’s outstanding players when they host Luis Suarez and Premier League leaders Liverpool on Thursday.

Uruguayan striker Suarez has already scored 19 league goals this term despite having been suspended until the end of September for biting Chelsea defender Branislav Ivanovic last season.

His run of form has helped Liverpool go top with a run of four straight wins, in which they have scored 17 goals, while City, who could move above the Reds with a win, have scored 16 in a similar run of four victories.

As City look for a second title in three seasons, Milner feels that the visit of Liverpool, and the following home game against Crystal Palace, offer City a real opportunity to take charge in the title race.

“(Suarez) is having a pretty good season,” said the England midfielder.

For the first time in the post-1992 Premier League era, just two points separate the top five teams on Boxing Day, and the erosion of Arsenal’s seven-point lead has also given hope to seventh-place Tottenham and eighth-place Manchester United.

Arsenal’s bruising 0-0 draw at home to Chelsea on Monday left Liverpool top at Christmas for the first time since 2008.

Liverpool manager Brendan Rodgers remains without Steven Gerrard, Daniel Sturridge and Jose Enrique due to injury, but in Suarez he can call upon the outstanding player of the season so far.

City’s own leading man, Sergio Aguero, is currently sidelined with a calf complaint, and having seen Liverpool rout Tottenham Hotspur 5-0 in their last away game, manager Manuel Pellegrini predicts a “very difficult” encounter.

“But I think this Premier League, we are just finishing the first half, in two more games.

“And this Premier League will not just be Liverpool and Manchester City. Five or six teams will fight until the end.”

Second-place Arsenal, behind Liverpool on goal difference, will hope to capitalise on any slip-ups by Rodgers’s side when they visit London rivals West Ham United.

Chelsea have failed to sparkle during the first half of the season, but with Liverpool only two points ahead of them, captain John Terry knows that Jose Mourinho’s side remain very much in contention.

“We all know, and the fans have seen it home and away, that we can get better,” Terry told Chelsea TV.

“So while everyone is dropping points around us, hopefully in the new year we have to start firing and put ourselves on a good run of games.

“If we do that we’re more than capable of pulling away from everyone.”

Tottenham, four points below the top five, host West Bromwich Albion, with Tim Sherwood set to experience life as a fulltime Premier League manager for the first time after being appointed as the permanent successor to Andre Villas-Boas on Monday.

Defending champions United, meanwhile, will look to close the eight-point gap that separates them from arch rivals Liverpool when they visit Hull City.

United have won four consecutive games in all competitions since the shock of successive home defeats by Everton and Newcastle United, and manager David Moyes hopes it will stand his side in good stead against a Hull team who have only lost once at home all season.

“It will be a tough game, that’s for sure, but we have got ourselves on a winning run and hopefully we can continue that,” he said.

Elsewhere on Thursday, Malky Mackay will take charge of Cardiff City against Southampton for the first time since being granted a stay of execution by owner Vincent Tan.

Mackay looked destined for the sack after being told by Tan to either resign or face dismissal, but chairman Mehmet Dalman revealed on Monday that the club are working to resolve the situation through talks.

“The players have trained as they always do,” Mackay said.

“We have big games to prepare for and no matter what goes on, that’s my No 1 focus for this club and it always will be.”

Andy Murray Loses First Match Since Recovering From Back Surgery