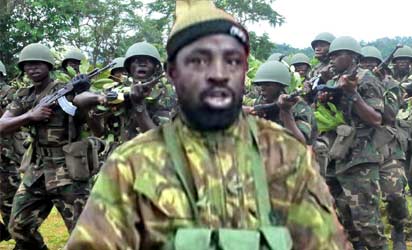 The Leader of terrorist  group, Boko Haram, Abubakar Shekau has again appeared in a video clip which was released by the sect on Wednesday. In the video, he claimed responsibility for last week’s attack on Benisheikh, Borno. That attack adversely affected over a hundred and sixty people.
You will recall the former Joint Task Force (JTF) spokesman in Borno State, Lt Col Sagir Musa, had in a statement on August 19 revealed that Abubakar Shekau, the most dreaded and wanted terrorist leader, may have died. In his words:

“Intelligence report available to the Joint Task Force (JTF) Operation Restore Order revealed that Abubakar Shekau, the most dreaded and wanted terrorist leader, may have died.”

“Shekau was mortally wounded in the encounter and was sneaked into Amitchide — a border community in Cameroon — for treatment from which he never recovered,” the JTF statement had said.

Well, a video has been posted by the sect online , showing Shekau, who was clad in a military attire speaking and defending his actions

“Nigerian soldiers are late. After killing many of them in Monguno and Benisheik, we have snatched their armoured carriers and Hilux vans and then hoisted Islamic flags on them. We now move freely with them,” he said.

The Army Public Relations Unit has said it would study the video clips.