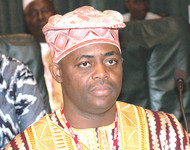 Former Aviation Minister Femi Fani-Kayode has urged supporters of All Progressives Congress (APC) to close ranks and be more accommodating to ensure the victory of the party at all levels in 2015.

Fani-Kayode made the call on Thursday in Yola while speaking with newsmen.

The APC chieftain , who spoke against the backdrop of leadership tussle facing the party in Adamawa, Kano and Sokoto states, said stakeholders needed to come together to face the challenge of edging out PDP.

“We are fighting PDP. We must come together, close ranks and fight it.”, Fani-Kayode said.

“South-West is controlled by APC, we have APC Governors and members in South-South and South East as well as North East and North West.

“APC is a national party with Muslims, Christians and traditionalists; everybody is welcome in APC.”

He said the defection of Nyako and four other governors to APC was a popular action that would contribute to APC’s victory not only in Adamawa but at the national level in 2015.