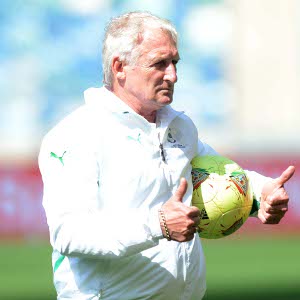 The Bafana Bafana mini training camp scheduled for 27-30 December 2013 has been called off.

Coach Gordon Igesund has decided to give the players some rest ahead of the 2014 Caf African Nations Championship (Chan) that is scheduled to start on Saturday 11 January in Cape Town.

“I feel this has been a hectic season for everyone, especially the players so it’s only fair that we call off the mini training camp and give them some rest. I would like them to go spend some time with their families and come back refreshed ahead of a very long camp,” said Igesund.

“I would also like to take this opportunity to wish everyone a merry Christmas and a prosperous new year. Let us go into 2014 with more vigour and energy so we can face the challenges that may come up.”

Bafana Bafana will start their training camp on Thursday, 2 January in Cape Town.

They play their first match of the tournament against Mozambique on Saturday,11 January at 6pm CAT (SA, GMT+2), followed by a clash against Mali (15 January, 5pm) and they round off the group stage when they lock horns with Nigeria (19 January, 7pm).

Newcastle United Reveals Arsenal Can Have Cabaye For £22m