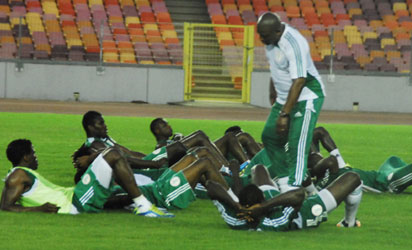 At the Abuja National Stadium on Saturday, Nigeria’s CHAN Eagles continued their build-up to the African Nations Championship by recording a 2-0 win over Plateau United on Saturday in Abuja.

The technical crew of the Super Eagles fielded a relatively strong side that had a blend of both youth and experience.

Some of those who started the match are: Skipper Chigozie Agbim, Ebenezer Odunlami, Azubuike Egwuekwe, Yinka Adedeji and Solomon Kwambe in defence.

The Eagles started the game on a positive note as Abubakar forced two excellent saves from the Plateau United goalkeeper inside the first 10 minutes, as the national team threatened to take the lead.

Uzoenyi however got the desired opener in the 25th minute, when Kwambe’s good interchange of passes with Archiv created space for Uzoenyi to score.

Nigerian coach, Stephen Keshi made wholesale changes to the team at halftime, save for Odunlami who stayed on, with the likes of Dele Alampasu coming in.

With the half seeming like it would end up as a goalless affair, Mfon Udoh slided in to poke the ball into the net as the Eagles’ doubled their lead.

After the game, Keshi acknowledged that the team had improved from the previous performance against Niger Tornadoes. He however decried the lack of activity in the league which he noted was having a negative effect on the players’ fitness levels.