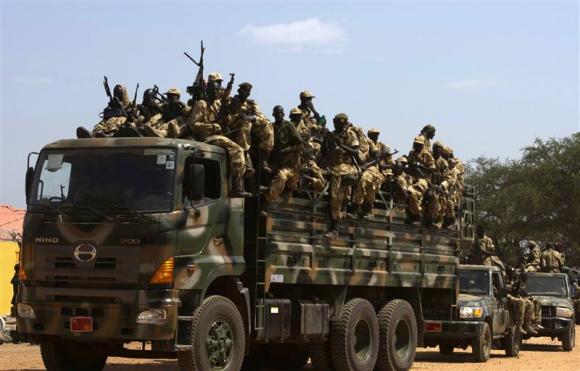 By Carl Odera and Ben Makori

(Reuters) – Fighting spread in South Sudan and the U.N. said it was trying to move more peacekeeping forces there in the hope of averting full-blown ethnic civil war in the world’s newest state.

The government said it had sent more soldiers to retake the flashpoint town of Bor from rebels and had kept control of the oilfields crucial to the economy of the impoverished country.

Foreign Minister Barnaba Marial Benjamin said the army in Bor had spotted former Vice President Riek Machar – the man the government accuses of trying to seize power by force – on the battlefield, but he had escaped by boat.

It was impossible to verify the minister’s account independently and Machar could not be reached for comment.

U.N. Secretary General Ban Ki-moon told a news conference in Manila the U.N. planned to send resources from other peacekeeping missions in the region to South Sudan.

“We are now actively trying to transfer our assets from other peacekeeping missions like MONUSCO (in the Democratic Republic of Congo) … and some other areas,” he said.

“And we are also seeking support from other key countries who can provide the necessary assets.”

Clashes between rival groups of soldiers in the capital Juba a week ago have spread across the landlocked country, which won its independence from Sudan in 2011 after decades of war.

The army acknowledged losing Bor in the northern Jonglei State on Wednesday, and a day later the United Nations said oil workers had taken refuge in its bases in neighboring Unity State.

Foreign governments have urged both sides to stop fighting, fearing for the stability of an already fragile region.

President Salva Kiir, from South Sudan’s Dinka ethnic group, has accused Machar, a Nuer who he dismissed in July, of trying to launch a coup. The two men have long been political rivals.

Machar dismissed the charge but has since said he is commanding troops fighting the government.

Government soldiers had come across Machar with a group of fighters in Bor, Foreign Minister Benjamin said, without going into details of where or when the encounter took place.

“Riek managed to escape, used his boat along the Nile and ended up in his village of Ado and went into Bentiu (the administrative capital of Unity) … the night before, he attacked government institutions,” Benjamin added.

Reuters television footage showed the government sending more troops on Saturday to Bor – the scene of an ethnic massacre of Dinka in 1991 by Nuer fighters loyal to Machar.

“The government had to assert its sovereignty and send in troops in order to push out these renegades in the main city centre … they are being cleared from this city now,” he added.

Benjamin said Machar had not seized oilfields in Unity.

“Of course there is a threat. But … he is not occupying the oilfields. The oil has been running. It is just because the workers there are frightened because of what is happening. I am sure this is an area that must be properly protected,” he said.

Information Minister Michael Makuei said on Saturday an army divisional commander in Unity State, John Koang, had defected and joined Machar, who had named him the governor of the state.

The United Nations said around 62,000 people had been forced to flee their homes in five of South Sudan’s 10 states. Around 42,000 of them were seeking refuge at U.N. bases, it added.

“Looting of humanitarian compounds has been reported in Jonglei (Akobo and Bor) and Unity. Several U.N. and NGO compounds in Bor town have reportedly been completely looted, including vehicles stolen,” the U.N. Office for the Coordination of Humanitarian Affairs said in a report.

A spokesman for U.N. peacekeepers said they were bringing in more aircraft from their logistics base in Entebbe in Uganda to South Sudan.

A diplomatic source at the U.N. in New York said elements of the U.N. intervention brigade in eastern Congo could help out in South Sudan, but would only reinforce security at U.N. bases and not try to confront armed groups.

The source said the U.N. has asked countries to help it get real-time satellite images of South Sudan and there was a possibility of using unmanned surveillance drones, currently deployed in eastern Congo but that would take time.

The U.N. peacekeeping mission in South Sudan said on Sunday it had started relocating non-essential staff and planned to reinforce its military presence in Bor and Pariang to help protect civilians.

The spokesman said about 100 civilian staff of the South Sudan peacekeeping mission were being relocated on Sunday, and 60 staff from other U.N. agencies left on Saturday.

Three U.S. aircraft came under fire from unidentified forces on Saturday while trying to evacuate Americans from the conflict. The U.S. military said four of its members were wounded in the attacks.

The U.N. mission in South Sudan said one of four U.N. helicopters sent to Youai, in Jonglei state, had come under small-arms fire on Friday. No crew or passengers were harmed.

Related Topics:worldAfricaConflictSouth Sudan
Up Next