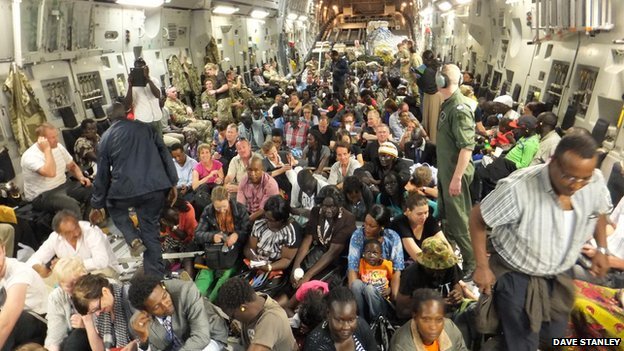 Four US service personnel on an evacuation mission have been wounded after their aircraft were shot at in South Sudan, the US military says.

The three CV-22 Ospreys were attacked as they approached Bor, which is occupied by forces loyal to the former Vice-President Riek Machar, it added.

South Sudan has been in turmoil since President Salva Kiir accused Mr Machar a week ago of attempting a coup.

Mr Machar told the BBC the rebels were under his control.

He was in control of large parts of the country, he said, and troops loyal to him had also seized control of Unity, a state on the border with Sudan which produces much of the country’s oil.

He added that he was prepared to negotiate with the government if politicians arrested earlier this week were released.

At least 500 people have been killed since the fighting began.
Ugandan involvement

The US military said the Ospreys, aircraft which can fly both like helicopters and like planes, were involved in the evacuation of US citizens from Bor.

A statement said all three aircraft were damaged by small arms fire by unknown forces as they approached the town.

The aircraft returned to Uganda’s Entebbe airport, from where the wounded service personnel were transferred onto a US Air Force C-17 transport aircraft and taken on to Nairobi, Kenya, it added.

All four were treated and are in a stable condition, the statement said.

Uganda is one of a number of other countries trying to evacuate their citizens from South Sudan.

It has sent troops to take part in the operation. They will also try to secure the capital Juba, just 75km (50 miles) from the border, reports say.

However, Uganda denied reports that it has been helping the South Sudanese army by bombing Mr Machar’s forces in eastern Jonglei state, of which Bor is the capital.
Commander ‘defects’

The army is trying to retake Bor. Jonglei is one of the most volatile regions in the country.

In Unity state, a major oil-producing region, a senior commander, General James Koang, was reported to have defected to Mr Machar’s forces.

Mr Machar said General Koang was now in control of the state, but the military, the Sudan People’s Liberation Army (SPLA), says he defected alone and did not take any forces with him.

A resident in Unity state told the BBC that Gen Koang announced on local radio he had joined Mr Machar’s rebellion.

On Friday African mediators held talks with Mr Kiir in an attempt to avert civil war.

The talks are set to continue and US Secretary of State John Kerry said he was sending a special envoy, Ambassador Donald Booth, to help foster dialogue.

President Kiir, a member of the majority Dinka ethnic group, sacked Mr Machar, who is from the Nuer community, in July.

He said that last Sunday night uniformed personnel opened fire at a meeting of the governing party, the Sudan People’s Liberation Movement (SPLM).

Violence then broke out in Juba and has since spread across the country, pitting gangs of Nuer and Dinka against each other.

The whereabouts of Mr Machar, who has denied trying to stage a coup, remain unknown.
Worst violence

Thousands of civilians have flocked to UN compounds seeking shelter from the unrest.

The UN on Friday condemned an attack on its compound in Akobo, Jonglei state, a day earlier in which two Indian peacekeepers and at least 11 civilians were killed.

Jonglei state has seen some of the worst violence since South Sudan became independent from Sudan in 2011, with hundreds killed in periodic clashes between rival heavily-armed ethnic militias sparked by cattle-rustling.

Sudan’s arid north is mainly home to Arabic-speaking Muslims. But in South Sudan there is no dominant culture. The Dinkas and the Nuers are the largest of more than 200 ethnic groups, each with its own languages and traditional beliefs, alongside Christianity and Islam.

Following decades of conflict, weapons are widely available across much of South Sudan.

South Sudan’s government insists the clashes are over power and politics, not between ethnic groups.

President Kiir said the majority of those arrested after Sunday’s alleged coup attempt were Dinka, not Nuer.

The oil-rich country has struggled to achieve a stable government since becoming independent.