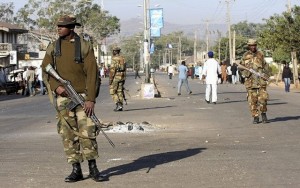 The Special Task Force on security in Plateau State said it would deploy its personnel to search visitors at recreation centres in the state during Christmas and New Year festivities.

This information is contained in a press statement signed by the Media Coordinator, Capt Salisu Mustapha, in Jos on Saturday.

The statement stated that the STF would carry out the task jointly with local security operatives.

It stated that the search was to ensure that firearms were not smuggled into the recreation centres.

According to the statement, vehicles are banned from entering the premises of recreation centres during the celebrations.

The STF called on religious bodies to also put security measures in place during the period.

The taskforce said it would provide security at churches and strategic areas of the state throughout the period of the celebrations.

Nigerian Bar Association Calls For A Corrupt-Free Judiciary By 2014