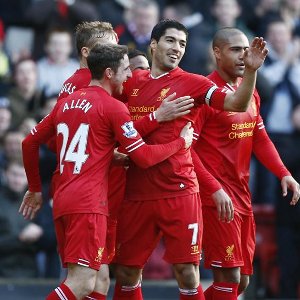 Luis Suarez celebrated his new contract by sending Liverpool to the top of the Premier League thanks to two goals and another virtuoso display in a 3-1 home win over crisis club Cardiff City on Saturday.

The irrepressible Uruguayan, who looked to be heading out of Anfield in the close season amid his ban for biting, expertly volleyed in the opener before setting up Raheem Sterling for the second after a superb ball from the resurgent Jordan Henderson.

It was soon three when 26-year-old Suarez netted his 19th of the season on halftime with a superb curling shot from the edge of the box following more Henderson magic with a back-heel.

Liverpool hammered Tottenham Hotspur 5-0 away last weekend and could have had more against Cardiff with Suarez almost netting a hat-trick when he clipped the post.

The easy win over 15th-placed Cardiff and beleaguered manager Malky Mackay put Liverpool a point clear at the top with 36 from 17 games ahead of previous leaders Arsenal hosting Chelsea on Monday (2000 GMT).

Suarez, again captain in the continued absence of the injured Steven Gerrard, penned a reported four-and-a-half year deal on Friday as Liverpool try to build on a strong start and finally challenge for the title again after years of woe.

Facing one of the in-form players in world football was not what Cardiff manager Mackay wanted at the end of a week where reports said he had been asked to resign or be sacked by Malaysian owner Vincent Tan despite gaining promotion.

Cardiff fans should have been enjoying a trip to famous Anfield in their debut Premier League season but instead held up a “Tan Out” banner and booed the controversial shades-wearing tycoon, who has also switched the club kit to red from blue.

The pair had only previously met in the league once in 1959, when Liverpool great Bill Shankly took charge for the first time as Cardiff won 4-0 away. That was never going to happen on Saturday but Jordan Mutch grabbed one back in an improved second half.

Manchester City Move To Second In The Premier League Table